I travel on public transport frequently and after visiting numerous other transport museums around the world, I finally made it to the London Transport Museum in Covent Garden.  The museum explores the heritage of London and its transport systems and I couldn’t wait to step through its doors.  Standard admission to the museum is £21 or £18.50 for visitors arriving after 2.00 p.m.  Although ticket prices might seem at first glance quite expensive they do allow unlimited return visits within one calendar year.  More information can be found here.

The museum is located on three levels and it is suggested that visitors start on the upper floor and gradually make their way down to ground level.  The London Transport ‘journey’ begins in the 1800’s when London was a compact city with most people working within walking distance from their homes.  Streets were often crowded with people with the use of private carriages only accessible for the wealthy.

Horse buses started to appear from 1829 but these were still beyond the means of most Londoners.  It wasn’t until 1870 that horse tramways started to operate along most of London’s inner suburban main roads.  Trams were not allowed in the central streets of the City and Westminster but with their high capacity and cheap fares they gave working class Londoners the first means of public transport they could afford.

The exhibition then explains how railways also played their part in shaping London’s growth.  By the 1830’s and 1840’s routes reached the capital from all directions forming a circle around the city.

Moving on to buses, the iconic red London bus has a lengthy history.  The second half of the 20th century saw the introduction of the iconic Routemaster bus.  These bright red double decker buses ran throughout London and soon became instantly recognisable by everyone.  When London Transport was formed as a single company in 1935, red was already the predominant colour so all buses in Greater London became red.  Despite production ceasing in the 1960’s, Routemasters continued in normal service until 2005, with a heritage route still enabling visitors to ride this classic bus.

Continuing through the museum, the next gallery focussed on the London Underground, affectionately referred to as the Tube.  The U.K. capital is home to the world’s first underground rail network with work commencing on the Metropolitan Line in 1860.  Greater London is now served by 11 underground lines along with the Docklands Light Railway, the London Overground, the Elizabeth Line and National Rail services.

The Elizabeth Line is London’s newest railway and runs through central London, from Reading and Heathrow airport in the west and Shenfield and Abbey Wood in the east.  The line was originally known as Crossrail during its early stages of planning and construction but was renamed the Elizabeth Line in honour of Queen Elizabeth II who officially opened the service by unveiling the commemorative plaque in May 2022.

The ‘On The Surface’ gallery is in two sections, covering the pre and post war periods.  During the two world wars the London transport system and its staff played a vital role in keeping the city moving by contributing to the wider war effort.  The tunnels of underground stations were transformed into air raid shelters during the Second World War so that people could escape the dangerous bombing raids.  When the air raid sirens sounded people would head to the underground in order to keep safe.

We then explored a temporary exhibition entitled ‘Hidden London’.  Here we visited a replica of an abandoned underground station to discover some of the secrets that lurk beneath busy London streets.  On this immersive journey into forgotten parts of the Tube network we learnt about the Plessey aircraft factory which employed over 2,000 staff during WW2.

Most of the employees were women who worked in two 2.5 mile long underground tunnels on the eastern section of the Central Line.  Hidden London also features a section on Winston Churchill of how he took shelter in the Railway Executive Committee’s bombproof headquarters during the wartime blitz on the capital.

The ground floor of the Transport Museum holds a collection of more than 80 vehicles including a classic red double decker bus.  It’s possible to climb on board many of them to discover how travelling by public transport has changed over the years.

Last but not least a section of the gallery is devoted to the roundel.  This is the symbol of London’s public transport system and from its beginnings as a platform name board in 1908 it has become one of the most recognised symbols in the world.  The iconic symbol can be found on trains, buses, at bus stops, stations, on staff uniforms, Tube maps and publicity leaflets.

In addition to providing a wealth of information on the history and workings of London Transport, the museum has much to offer families with young children.  They are extremely well catered for with lots of interactive activities and role play opportunities.  There’s a large wardrobe filled with dressing up clothes where children can take on the pretend roles of bus drivers and railway staff.

Lastly, there’s an attractive cafe with moquette upholstered chairs in the same patterns as heritage buses and underground carriages.  Mention must also be given to the splendid gift shop filled with vintage transport posters, books and toys.  I particularly liked the moquette cushions in transport patterns as these would look very attractive on plain sofas as well as bringing back fond memories of riding London’s buses and the underground.  I hope this post may have inspired some of you to visit the London Transport Museum in Covent Garden.

During our visit we were guests of the London Transport Museum and as always all views and opinions are entirely my own. 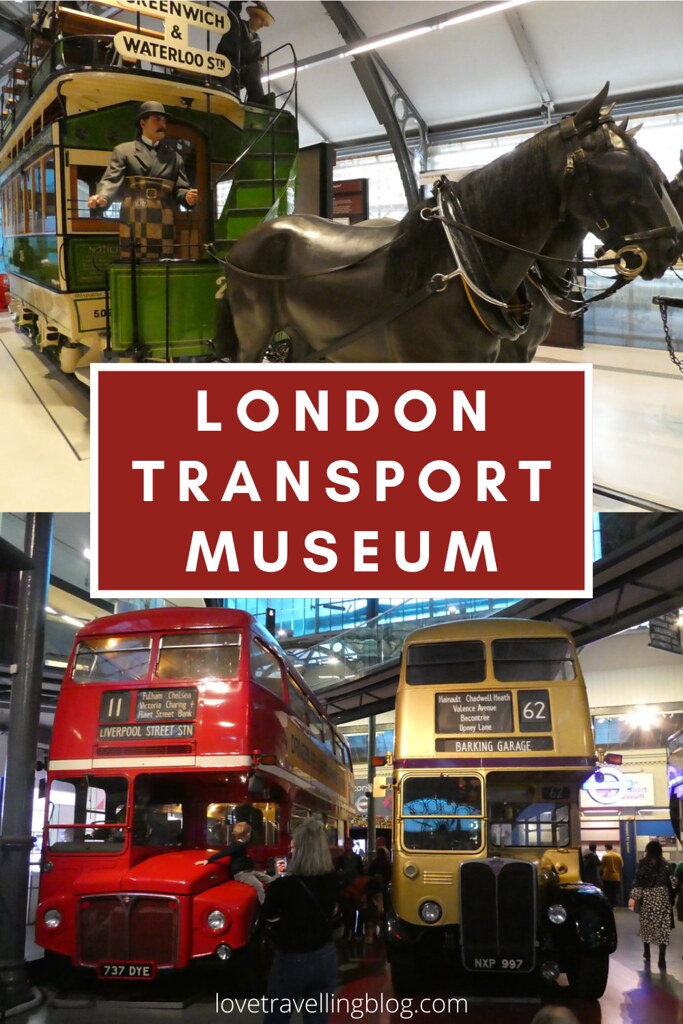