The Peak District was the first national park to be created in the United Kingdom back in 1951 and spans 555 square miles of the southern end of the Pennines, mostly in Derbyshire.  The park receives more than 10 million visitors each year as it is within an hour’s drive of both Manchester and Sheffield and within easy reach of the M1 and M6 motorways.  At long last, we decided to go along and explore the area for ourselves.

Our first stop was in the charming small town of Bakewell, which is the only town wholly in the national park.  This historic small market town is lovely with its characterful stone cottages and old buildings.  The River Wye winds it’s way through the town so we started our visit with a stroll along the riverbank as far as it’s Gothic five arch stone bridge.  Even in mid-winter there were plenty of people enjoying a riverside stroll with ducks and geese on the look out for some rich pickings.

From the riverside we continued on to the town centre which is a shopper’s paradise cram packed with delightful small shops offering an array of local produce, gifts and outdoor apparel.  The Derbyshire Emporium on the corner of Matlock Street showcases products by local craftspeople together with some of the best food and drink the region has to offer.  We weren’t visiting on a Monday, but if you are don’t miss the large weekly market along Market Street as I gather it’s very popular with over 100 stallholders selling their wares.

After exploring the shops along the town’s narrow streets, alleyways and pretty courtyards we were ready for a bite to eat so we headed to The Original Bakewell Pudding Shop in The Square.  We couldn’t possibly come to Bakewell without sampling one of their famous Bakewell tarts or puddings!  The quaint building dates from the 1800’s and their handmade delicacies have been on sale since 1830.  Entering the door, there’s a well stocked bakery and gift shop on the ground floor with a restaurant featuring original wooden beams and exposed brickwork upstairs.

As with most people, we were familiar with Bakewell tarts but had never seen or tried a Bakewell pudding before so were intrigued to find out what the difference was.  Talking to the helpful waitress we learnt that a pudding is made from a base of buttery puff pastry topped with a layer of strawberry jam, soft set custard and flaked almonds.  The tart was developed as a variant of the pudding later in the 20th century and differs as it has a sweet short crust pastry base covered in a jam and fluffy sponge filling, topped with white fondant icing and a cherry.

They both sounded delicious so the dilemma was which should we choose?  The answer was simple as we ordered one pudding served with a jug of warm custard and one slice of tart with fresh cream and shared them between us.  They both tasted yummy but if I had to choose, I’d probably opt for the original pudding with its softer filling.

Nourished with tarts, puddings and pots of tea it was then back to the car and on to our next location, the spa town of Buxton.  This elegant town has been welcoming visitors since Roman times due to the healing properties of its thermal spa waters.  It’s also the highest market town in England standing 300 metres above sea level in the High Peak.

After parking the car, we headed straight to the centrepiece of the town, its magnificent Georgian crescent.  Much of the town’s Georgian architecture is linked to the 5th Duke of Devonshire who carried out ambitious plans to make Buxton a spa town to rival that of Bath in the 18th century.  Buxton Crescent was designed by John Carr of York and is regarded as one of the most impressive in the country.

The crescent is a listed building and has recently undergone major renovations to become a luxury hotel.  It’s also home to the newly opened Buxton Crescent Visitor Experience (standard admission £10). Its nine galleries tell the story of Buxton from its beautiful crescent, famous water and of the many people who came to take the waters as a cure for their illnesses.

There’s lots to interest the whole family with an interactive game and a virtual reality ride in an air balloon across the Peak District during the 1780’s.  Our interesting tour lasted approximately 75 minutes and ended with a short film about why Buxton water is still so special today.  The Buxton Water Company was taken over by Nestlé in 2012 but its water is still piped from its original source close to  the Crescent to its new bottling plant two miles away.

After leaving the visitor experience we crossed over the road to St. Ann’s Well, located next to the Pump Room at the foot of The Slopes.  This is a free source of spring water so we each filled a bottle to drink straight from the well.  The geothermal spring rises from about 1 km below ground and approximately a million litres of water flows out each day.  The water is a steady 27 degC and the high magnesium content comes from filtering through rocks deep underground since falling as rainwater 5,000 years ago.

Next we looked in the Pump Room which was built for the 7th Duke of Devonshire in 1894.  It was last used to take the waters in the 1970’s and has served as the Buxton Visitor Centre for the past three years.

Continuing our afternoon in Buxton we walked the short distance to the Opera House where we had arranged to meet Netta Christie from Discover Buxton Tours to join her on one of her History and Heritage Walks.  There was no better place to start than the Opera House itself which was designed by the celebrated theatre architect Frank Matcham who also designed the Blackpool Tower Ballroom.  The theatre opened in 1903 with an auditorium seating 902 and attracts star performers to its wide programme of shows held throughout the year.

We stepped into the foyer to admire its original mahogany box office and exquisitely painted ceiling and gold leaf decorations.  Netta told us that the theatre itself was equally beautiful so it would be an absolute treat to attend a performance there sometime.

The Promenade extends to one side of the theatre and despite several of its historic buildings shrouded in scaffolding due to ongoing renovations, it still looked very impressive and I could just imagine Victorian and Edwardian ladies taking their afternoon stroll along there and into the Pavilion Gardens.

The gardens date back to 1871 and cover 23 acres of landscaped gardens with a Victorian bandstand (still in regular use throughout the summer months), a boating lake and miniature railway.

Continuing our tour we paused briefly outside the Old Hall Hotel where we heard about Mary Queen of Scots and her visits to Buxton where she stayed in the Tudor ‘Talbot Tower’ to take the waters.

A short uphill walk followed to reach the Devonshire Dome which at the time of its construction was the world’s largest unsupported dome.  The dome which has a larger span than St. Paul’s Cathedral in London was added to the Great Stables in 1888.  It has since been used as a hospital and is now part of the University of Derby.  Visitors are welcome to go inside to view the stunning interior but first need to report to reception and sign in.  Photography is strictly forbidden for the safeguarding of students so I am unable to illustrate the Dome but I do encourage you to take a look at its stunning interior when visiting the town.

On our way downhill, Netta pointed out a rare original Penfold pillar box (named after John Penfold) opposite the Opera House which is still in use today.  I take an interest in old post boxes and hadn’t seen one quite like this before so I paused briefly to take a photo to add to my collection.  Moving on, we took a look inside the Cavendish Arcade lined with high class small shops and located in the building that was formerly the spa town’s Victorian thermal baths.

Spending an hour in the company of Netta who is clearly passionate about Buxton, had been very enjoyable as we had learnt much more about the town than if we had just wandered around on our own.  In addition to walking tours, unique vintage tram tours stopping off at the town’s main attractions also run between March and October.  More details can be found here.

After a fun filled day exploring both Bakewell and Buxton it was then time to drive towards Ashbourne where we’d arranged to stay in a country inn called The Cow tucked away down a leafy lane in the small village of Dalbury Lees.  It had turned cold but we received the warmest of welcomes at this luxurious boutique inn with its wood burning stoves casting a warm glow across the cosy bar.

We were shown to our ground floor room which blew me away as soon as I walked through the door.  From its oversized padded headboard with cleverly designed concealed wardrobe to its prints of cows adorning the walls and cow upholstered stool.  The bathroom excelled too with its elegant simplicity not to mention the Molton Brown toiletries to pamper ourselves with later.

After making ourselves cups of tea and being spoilt for choice with a tea chest filled with a varied selection to choose from, we got ourselves ready for a meal in the inn’s casual dining restaurant.  The Cow theme continues into the bar with stools fashioned from milk churns and farm tools hanging from the walls.

Seated by the fire we were in seventh heaven sipping our drinks whilst perusing the menu.  Fish is a speciality of The Cow with ‘The Catch” specials board offering fresh fish packed in ice delivered straight from fishing boats in Cornwall.  I settled on a creamy fish pie which was loaded with fresh white fish, salmon and prawns and topped with fluffy mashed potato, and was winter comfort food at its best.  Across the table my son was more than happy with his chicken supreme and we followed these with a mouth-watering crème brûlée which was light and creamy beneath its crispy topping.

After lingering awhile beside the fire we returned to our room and before long we were fast asleep and looking forward to the day ahead. 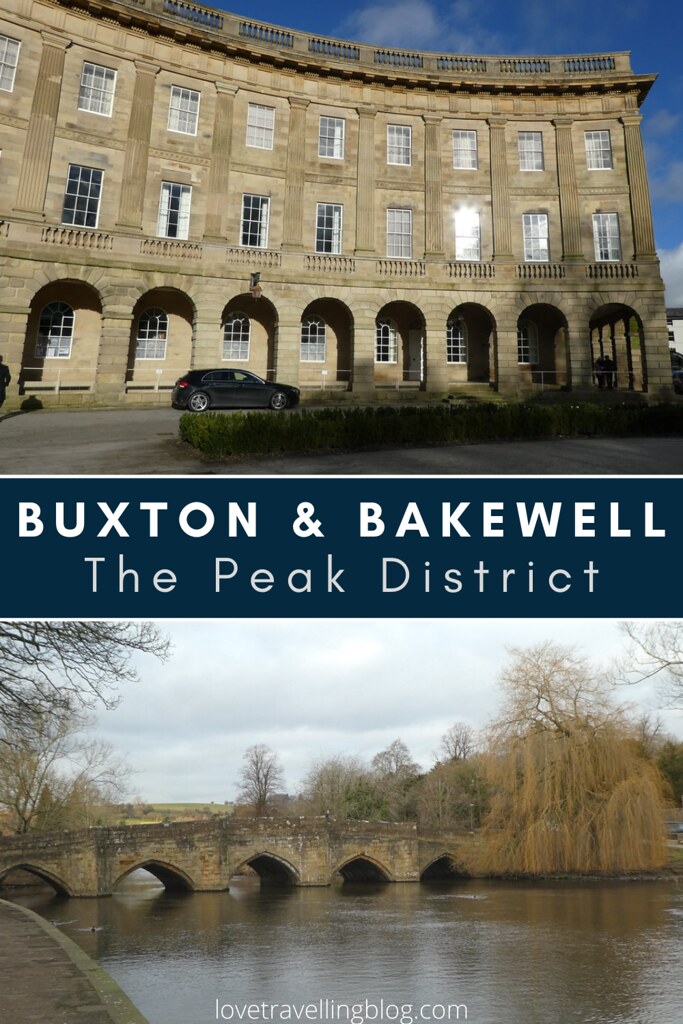 42 thoughts on “Day 1. The Peak District – Exploring Bakewell and Buxton”