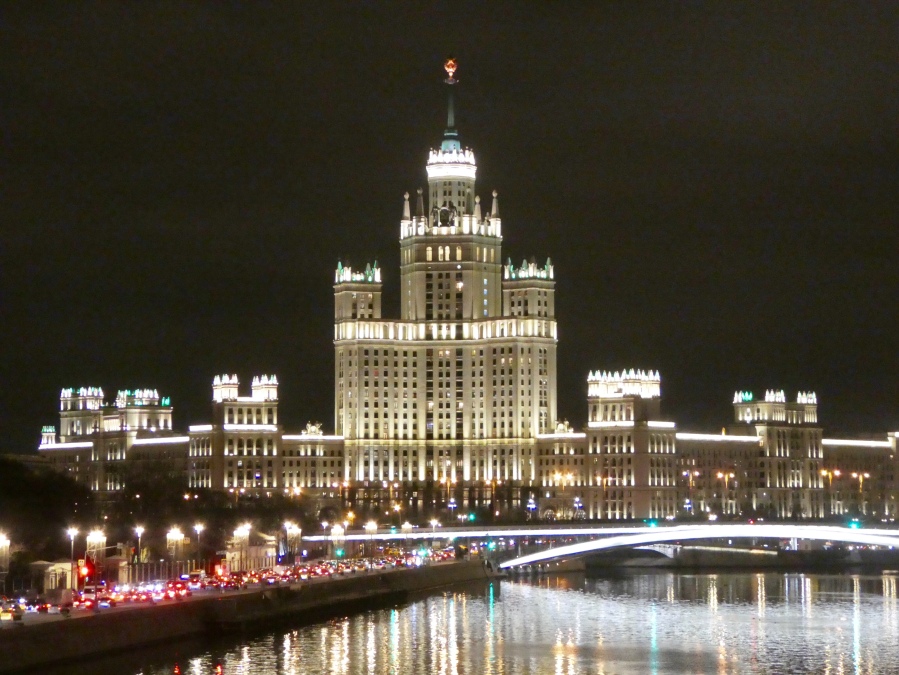 After a leisurely breakfast we took the metro to Lubyanka to make a return visit to the Central Children’s Store next door to the station.  It had only been open about 40 minutes and few people were about as we took one of the lifts to the top floor to visit the Museum of Childhood.

There is a nominal admission charge of RUB 50 (61p) which also includes access to the rooftop viewing platform.  I always enjoy a visit to a toy museum but this one didn’t quite live up to expectations as it was extremely small.  There was just one room lined with glass fronted cabinets which were filled to the brim with a collection of toys, dolls and teddy bears.  Despite the exhibits being unlabelled, they were still interesting to look at and it was fun to discover the range of toys children played with before the fall of the iron curtain.

Located up a flight of steps from the Museum of Childhood is the store’s rooftop viewing gallery.  On a clear day the views would be superb but on our December visit it was dull and gloomy limiting the number of landmarks we were able to see.

Strategically placed along the balcony were a series of boards displaying information and photographs identifying the surrounding buildings.  Leaving the Children’s Store, we spotted the former headquarters of the KGB which was also home to an infamous prison where spies, political dissidents and enemies of the state were imprisoned.  It is now occupied by the Federal Security Service of the Russian Federation.  It’s hard to believe that Lubyanka was once a name associated with violence and torture, world’s away from the luxury shopping destination it has now become.

Just across the road we came across a stone archway leading to the Tretyakovsky Passage which is the only street in Moscow to be constructed from private funds.  Since 2000 this elegant passageway has been transformed into one of the most expensive shopping areas in the world featuring luxury brands.

From there, it was then just a short stroll to the famous Bolshoi Theatre which has stood proudly in Teatralnaya Square since 1856.  The theatre, featuring a neo-classical facade has been rebuilt and renovated several times and is one of Moscow’s iconic landmarks.  The Bolshoi Ballet and Opera are amongst the oldest and most renowned ballet and opera companies in the world and some day it would be wonderful to be able to attend one of their performances.

Continuing on our way, we spent some time window shopping in the historic TSUM department store which is located around the corner from the Bolshoi on Petrovka Street.  The exterior of the huge building was gift wrapped for Christmas with a large red ribbon and bow.  Stepping inside we glanced in the perfume, jewellery and clothes departments and noticed that the Veuve Clicquot champagne bar was already doing a brisk trade even though it was not even lunchtime.

This entire district of central Moscow is filled with designer stores including the likes of Armani and Tiffany’s.  Coming across a delightful glass covered arcade we couldn’t resist wandering indoors.  Its interior was absolutely stunning consisting of two linked arcades lavishly decorated with red poinsettias and extravagant festive garlands.  Each boutique contained luxury brands and we found an elegant cafe/bar operated by Bosco, the owners of GUM.

Leaving there, it wasn’t long before we reached the busier Tverskaya Street where we viewed the elegant salmon pink Government of Moscow building which is the official office of the Mayor of Moscow.  We wanted to take a photo of it but needed to wait patiently for a few minutes until there was a break in the traffic.

Our next stop on Tverskaya Street was to visit the Eliseevsky grocery store.  You might wonder why we should wish to visit a 24 hour supermarket but this is no ordinary store and bears no resemblance to shopping at Tesco.  Stepping indoors, we found ourselves in a neo-baroque style palace lavishly decorated with huge crystal chandeliers and marble pillars.  It sells everything from staple items such as bread, fruit and vegetables to luxury caviar and fine wines.

The building is over 100 years and was purchased in 1898 by the grocer Grigoriy Eliseev from St.Petersburg.  After renovations, the store opened in 1901 named after its owner.  It’s one of the most famous stores in Moscow and impresses customers and visitors alike with its sumptuous interior decorations.  There seemed to be almost as many people wandering along the aisles with cameras as those with shopping trolleys and surprisingly for such an upmarket store, prices were modest and similar to the supermarket in Sokolniki close to our hotel.

Eliseevsky lies very close to the Tverskaya metro station and as our next destination was Smolenskaya we hopped on a train, and arrived there within minutes.

Just outside the station we spotted a branch of My-My, which is styled as a Soviet canteen and has branches throughout the capital.  Although it’s not somewhere I would choose to dine in the evening, it’s ideal for a lunchtime snack and our bowls of soup were piping hot and an absolute bargain at RUB 109 (£1.33) each.  The self-service cafes have a bright and cheerful decor and seem popular with both office workers and families.

Feeling rested and nice and warm, we strolled around the corner to take a look at another of Stalin’s Seven Sisters magnificent skyscrapers, this one being the Ministry of Foreign Affairs.  It proved difficult to photograph though as the district is so built up, we were unable to find anywhere to capture the entire building.

The main attraction located off Smolenskaya Square is the historic Arbat Street, a pedestrianised shopping thoroughfare stretching for 1 km.  This district was once a location of craftsmen with the narrow side streets leading off Arbat Street describing various trades such as carpenter and baker.  It has been in existence since the 1500’s making it one of the oldest surviving streets in central Moscow retaining elements of its elegant past with its old fashioned street lamps and impressive architecture.

Although I consider it to be a ‘must-see’ sight, it’s now very touristy and almost entirely given over to gift shops selling tacky Russian hats and nests of brightly painted wooden dolls.  It’s also full of international restaurants and fast food outlets like KFC, McDonalds and the Hard Rock Cafe to name but a few.

Having reached the end of the street we caught the metro from the Arbatskaya Station along to Vystavochnaya Station so that we could visit the Moscow Metro Museum.  It was easy to find as it’s signposted and located near the metro station exit.  After enjoying our visit to New York City’s Transit Museum we were eager to see what the Moscow equivalent had to offer.  The museum offers free admission and explores the history of the network from the opening of its first line in 1935 to the present day as the fifth longest metro service in the world.

The museum exhibits actual equipment from the metro system including different kinds of tracks and cabling, turnstiles, tokens and uniforms.  There’s even a section of a train carriage and we had great fun pushing the buttons and flicking the levers in the driver’s cab.

Photographic exhibits display the construction of various stations and track, celebrations from the opening of the system to uses of the stations during war time.  Surprisingly it lacked a museum shop or anywhere to buy souvenirs which was a shame as I would have liked a small reminder of my visit.  Shop aside, it’s a great place to visit if you have an interest in public transport.

Located above the metro museum and station is Afimall City, a huge indoor shopping centre and entertainment complex so we spent an hour looking around and stopping off for a coffee.  Afimall serves the newly created central business district so we popped outdoors and marvelled at the futuristic steel and glass skyscrapers in this part of town.

We then decided that it was time to visit more of Moscow Metro’s most beautiful stations.  Taking Line 11 to Petrovsky Park we took the escalator to exit the station to access its shared station Dinamo.  Construction work was taking place to create an underground passage between these stations to enable easy access.  Whilst above ground we wandered across to view the exterior of the impressive VTB Arena, home of F.C. Dynamo Moscow.

We then took the escalator down to the Dinamo metro station, which is the deepest station on the Moscow network.  This station opened in 1938 and its platforms are adorned with porcelain medallions depicting various sportsmen and sportswomen.

Finally, we caught a Green Line train to Mayakovskaya Station which has art-deco stainless steel columns.  It was used as a bomb shelter during the Second World War, known in Russia as The Patriotic War.

It was quite late by the time we returned to our hotel in Sokolniki so after a short rest we again decided to eat near the hotel.  We discovered a cosy pub not far away and found a table in its window which looked enchanting covered in twinkling fairy lights.  Our mains of Beef Stroganoff and Roast Duck were both tasty but a little on the small side.

Later, we took the metro back to Red Square passing its ice rink and continuing along to Zaradaye Park for an evening stroll.  We had already visited the park in daylight but its illuminated floating bridge seemed to look even more beautiful after nightfall.  We’d expected more people to be there but it was surprisingly quiet compared to Red Square.

After pausing to take some photos we retraced our steps back to Red Square, opting to stroll through the enormous GUM department store on our way back to the metro station.  It was around 9.30 p.m. half an hour before the store’s closing time and it was lovely and quiet allowing us to take a close look at over 100 individually decorated Christmas trees, each one sponsored by stores in GUM.

These beautiful trees, each decorated using products representing the company’s brands were adorned with such items as flowers, pillows, clothes, watches and toys.  Moschino had created a giant golden handbag housing one of the trees.  Moscow Metro had their own tree and this was adorned with miniature carriages and other memorabilia from the rail network.  These trees take centre stage along the ground floor during December with a charity auction taking place this year for children’s heart related diseases.  Sponsored Christmas tree displays have now taken place in GUM for over ten years, proving popular and enchanting visitors to the store whilst raising money for charitable causes.

Happy but tired, we then returned to our hotel for the night after yet another wonderful day exploring Moscow.

Moscow University and its metro stations