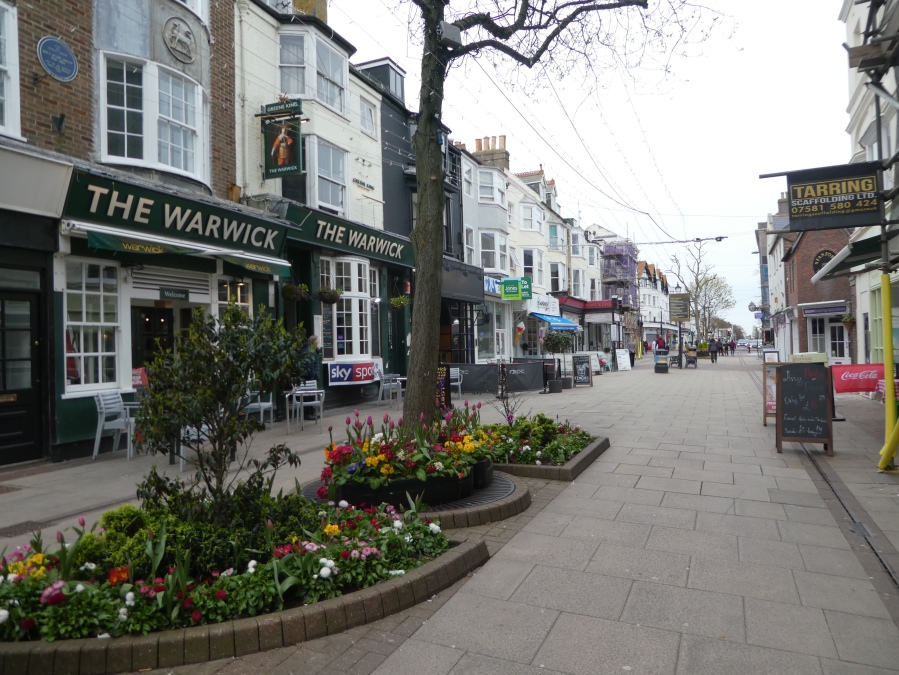 Another weekend at the seaside but this time on England’s south coast visiting Worthing and Brighton in Sussex.  My day began with a short train ride into Leeds followed by a longer journey into London King’s Cross Station.  From there, I took the underground across to Victoria Station for the last leg of my journey down to Worthing.  On my way along to the platform free sandwiches were being handed out from one of the stalls who were launching a new filling, so I gratefully accepted one and then ate it on the train.

Although I frequently take trains down to the south coast, it was the first time I’d been on this line any further than Gatwick Airport so I had my eyes peeled to the windows looking out for anything interesting.  As it happened, there was little of note for me to see until near the end of my journey when the train reached Hove and from there onwards I was treated to a few glimpses of the English Channel.

On exiting Worthing station, I realised that the town centre and seafront were about a mile away so I checked Google maps and set off pulling my case hopefully in the right direction.  The town is pancake flat so I was able to make good progress and before long was on the high street which still retains some of its historic buildings.  The first one I came across was the Assembly Hall, now a concert venue with a claim to fame of having the largest Wurlitzer organ console in Europe.

A few steps down the road brought me to the Worthing Museum & Art Gallery and with a sign indicating free admission, I couldn’t resist taking a look inside.  One of the helpful girls at the information desk offered to look after my case so I picked up a leaflet and started my self guided tour.

This stunning Edwardian building has a permanent display of internationally renowned costumes which I found interesting with some garments similar to those that I’d viewed at the Fashion Museum in Bath.  There are also galleries dedicated to archaeology, toys and fine and decorative arts.

Returning outdoors it didn’t take me long to reach the seafront but I could hardly believe how windy it had become and at times I could barely stand on my feet.  I’d booked a room at the Premier Inn which was much further along the seafront than I’d anticipated but eventually I found it.  The hotel is quite new and my sea view room had views across the shingle beach into which large waves were crashing.

After having a short rest I decided to brave the strong winds once again and take a walk along the seafront towards the pier.  Visiting Worthing Pier is free of charge and is accessed via curved paths on either side of the Pavilion Theatre.  My visit was very topical as a few days later Worthing Pier was voted pier of the year for 2019 beating 55 other piers to the title.

The pier was first constructed in 1862 at a length of 960ft (291 metres) but was slightly modified 26 years later.  There were few people about probably due to the inclement weather but I did spot two men fishing and also a middle aged couple near the amusement arcade in the middle section.  At the sea end I came to the Southern Pavilion and peering through the windows noticed that it had an attractive art-deco cafe.

I returned to the promenade along the pier’s western edge taking in the views towards the hotel.  Along the windbreak running down the centre of the pier was an eye catching art installation called ‘Art on the Pier’.  The perspex windows displaying work by local artists and talented school children.

Continuing into town, I glanced in some of the shops and the impressive Royal Arcade which was built in 1925 and restored to its former glory 20 years ago.  Some British seaside towns have gone into a state of decline in recent years but gladly Worthing has retained much of its Victorian elegance and continues to flourish.

It was 9.00 p.m. when my son arrived into Worthing and as it was so cold we decided to go for a curry and finalise our plans for the weekend.

A short break in Worthing and Brighton

A weekend in Blackpool

A day at the seaside in Bournemouth

52 thoughts on “Day 1. Worthing and Brighton – a weekend break”