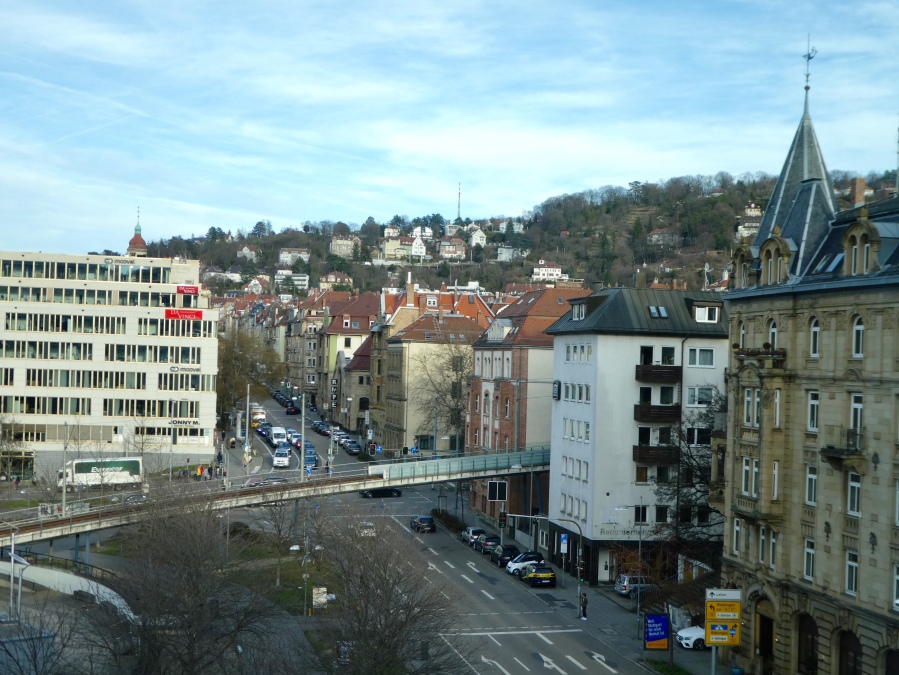 It was a wet and windy start to the day as we travelled by train to Manchester Airport for our lunch-time Ryanair flight to the German city of Stuttgart. There was ample time to pop into Costa for some pre-flight sandwiches and cups of coffee before boarding our Boeing 737-800 aircraft.

Luckily I had been allocated a seat in the emergency exit row so I had extra room to stretch out on the short 90 minute flight over to the Manfred Rommel International airport which lays claim to being the sixth busiest in Germany. Stuttgart lies in south west Germany and is approximately 200km from the cities of Frankfurt, Nuremberg and Munich.

With German efficiency, we sped through immigration and followed signs to the S Bahn for a train to take us into the city centre. The airport is located 13 km (8 miles) south of Stuttgart and to reach the centre we needed to purchase Zone 1-3 tickets from a machine at a cost of €4.20 (£3.60) each. Further details of the Stuttgart public transport network can be found here.

We took Line S2 as far as Vaihingen (5 stops) and then changed to the U Bahn Line U1 to Marienplatz (11 stops) where our hotel was located. The journey from the airport took only 45 minutes including time waiting for the U Bahn at Vaihingen station. Except for the final stop, the entire journey had been overground enabling us to form our first impressions of the city which looked attractive with its low rise buildings.

Our hotel reservation was at the IBIS Hotel Stuttgart Centrum and soon after arrival we were settling into our fourth floor room which had panoramic views of the square and the hills beyond.

Setting out again, we collected our Stuttcards which provide admission to all of the city’s attractions including use of the region’s public transport system if an optional Stuttcard Plus is purchased. There are no barriers on the transport system and the red cards just need to be validated in one of the yellow machines on board the train or bus the first time they are used. It was so convenient having a U Bahn station almost outside our hotel door and it only took around five minutes to reach the Rathaus (town hall) station in the heart of the city.

The town hall, completed in 1956 is a bastion of post-war functional architecture with its clock tower standing 61m tall. Although the clock tower is impressive, I wasn’t exactly a fan of this architectural style but I needn’t have worried as just steps away I found some beautiful old buildings much more to my liking in Stuttgart’s historic centre, the Schlossplatz.

Dominating this square is the Jubilee Column and the New Palace (Neues Schloss). The palace was built as the residence for the kings of Württenburg in the 18th century and now houses several government offices.

From Schlossplatz we wandered along Königstrasse which is Europe’s longest pedestrianised shopping street, brimming with activity late on a Saturday afternoon filled with weekend shoppers and those just out for a stroll. A talented violinist was entertaining the crowds part way along this tree lined boulevard which continues as far as the central railway station (Hauptbahnhof) at its north eastern end.

This landmark building is recognisable for its 12 storey clock tower which has a large, rotating Mercedes Benz star insignia on its top. This is significant as Stuttgart is the home of the motor car, one of the reasons for our visit and an aspect we planned to look into in more detail during our short break in the city.  We then popped into one of the many cafes for a light snack before returning to our hotel for a short rest, taking the U Bahn from the Rotebühlplatz station.

It’s surprising how reviving a few cups of tea can be and after our drinks and a rest we set off out to find somewhere for dinner. We didn’t have to look very far as located just off Marienplatz, around the corner from our hotel we came across Onkel Otto, it’s board declaring that it was the XXL schnitzel paradise. This had us rushing up its steps and going inside. There were no available tables but after a 15 minute wait, we were shown to a cosy corner table inside the dark wood panelled traditional pub.

We thought that XXL sized schnitzels sounded a bit excessive even for us, so we both ordered a traditional Weiner Schnitzel with chips and glasses of wheat beer. Even these schnitzels were so large that they overlapped our large plates, tasting delicious sprinkled with fresh lemon. The pub had a relaxed, convivial atmosphere with affordable prices, good service and best of all was close to our hotel. We hadn’t heard about Onkel Otto’s beforehand but had just chanced upon it as we walked along the street.

Exhaustion then got the better of us as we unlocked our bedroom door and within minutes we were both sound asleep after such a pleasant introduction to our stay in Stuttgart.