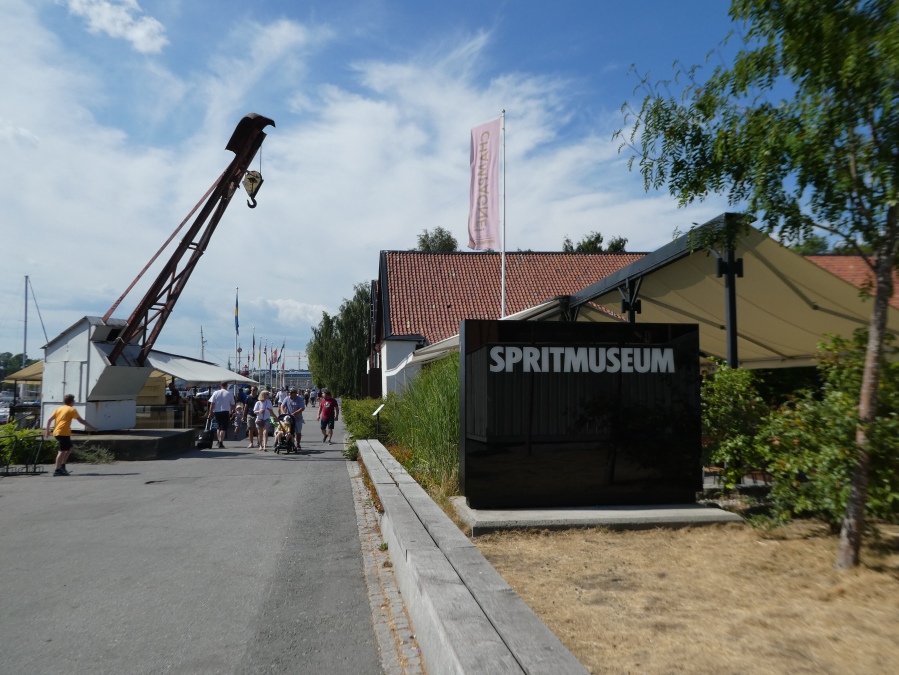 We enjoyed a leisurely start to the day before taking the metro into the city centre from where we walked a short distance for a No.69 bus to the museum park in the northern district of Djurgården. We alighted just outside the Swedish National Museum of Science & Technology where we had planned to spend the morning.  Entrance to the museum is SEK 150 (£12.65).   After picking up a map, we started exploring the Innovations Lab which charts the 100 biggest innovations in history as rated by Swedish people. These cover diverse inventions from the wheel to the steam engine through to more recent innovations including dishwashers and mobile phones.

I was very impressed with the way this exhibition was set out as it visualised innovations in new ways making it appealing to all ages.  Visitors also have an opportunity to vote either from the items displayed or by nominating something else.  Alongside familiar inventions are prototypes still on the drawing board encouraging creativity for future innovations. Using the touch screens to vote ourselves, the current top five innovations as decided by museum visitors were the car, antibiotics, the ball,  boats and ships and the sewage system!

At 11.00 a.m. and 2.00 p.m. each day an early 1950’s model railway operates along 50 metres of track in a realistic Swedish landscape and as we have a fondness for model railways we made sure we were there to see it running.  One of the museum staff spoke about the railway but as this was only in Swedish, we just watched the trains pass through the tunnels and and run along the track.

Continuing our tour, we explored a recreated mine down in the basement and wandered through the Mathematical Garden outdoors as we were leaving.  If, like us, you take a curious interest in how things work then I would recommend a visit to this fascinating museum.

Just as we were approaching the road, we noticed a bus coming along so we dashed to the bus stop managing to get there as it was about to leave. The bus took us back to Djurgården Bridge from where we strolled along the now familiar route under the shady trees towards the VASA museum.  A little further along the waterfront stand two smaller museums that had attracted our atttention earlier in the week, the first being the Spirit Museum, adult entrance SEK 120 £10.40).

This quirky museum, located in a pair of 18th century navy sheds takes visitors on a thought provoking tour of the Swedish alcohol culture. The fascinating ‘Spirits of a Nation’ exhibition begins with the making of alcohol then moves on to its effects from a drunken night out followed by an inevitable hangover. It explores questions of why we drink, how much we drink and when and where it’s acceptable to consume alcohol, from a park bench to a swish cocktail party. Tucked away in an imitation forest we stepped inside a caravan where we listened to some traditional Swedish drinking songs which are traditionally interspersed with tots of schnapps.

There are lots of interactive exhibits from sensory quizzes of different spirits to a small hangover room complete with thumping noises and swaying ceilings simulating the over-drinking experience. I also liked the winter room, with its blue lighting where visitors can lie down on a pile of virtual snow and feel the intoxication cycle from being stone cold sober to under the table!

The museum also displays art work from the Swedish vodka producer’s Absolut art collection. The majority of the paintings on display have featured in Absolut’s marketing with the brand coming to the world’s attention from its first commissioned piece by Andy Warhol, entitled Absolut Warhol in 1986.

Naturally, the Spirit Museum has an actual bar and summer terrace in an idyllic spot overlooking the marina and this is also open to non-museum visitors. It was another exceptionally hot day and I thought that a lunchtime alcoholic drink would make me drowsy so we browsed the menu and I ordered a blackcurrant and hibiscus kombucha whilst my husband opted for the lemongrass and rosemary option. It was the first time I’d tried one of these infused fermented teas which I thought tasted delicious and ideal on a hot, summer’s day. As we were enjoying relaxing on the shady terrace we decided to have a second drink and this time chose the Spirit Museum’s homemade tonics.

I selected rhubarb as I like its tart flavour whilst my husband was rather more adventurous with his choice of burnt rice and rose petals! When the bartender brought the drinks she explained that the rose petals were from the museum garden and had been dried and added to the quinine and burnt rice to add flavour. I had a sip of this concoction and it was quite pleasant and thankfully didn’t taste burnt at all,

We could have lazed on that terrace all afternoon but I’d set my heart on visiting the VikingAliv museum next door and with a large part of this museum being on a ride, I thought it would be relaxing . Adult admission is SEK 159 (£13.70) and begins with an upper floor gallery where we found a replica Viking longboat and learnt about the history of the Vikings in Sweden. Here we found out about the everyday lives of the Viking people, how they lived, what they ate and how they travelled.

The fun part of the museum was an interactive journey called ‘Ragnfrid’s Saga’ which was an 11 minute long ride in a small red car taking us on a journey through life in the Viking age in the year of 963. The ride began at Frösala Farm, the home of Ragnfrid and her husband Harald. From there we travelled on a journey and witnessed their life. The sound, lighting and moving settings were beautifully designed and enthralling for all age groups especially children.

After such a fun filled day we returned to our apartment in Solna for a well earned rest. Later, when the temperature had dropped a little we ventured out again for evening drinks (alcoholic this time!) on the AF Chapman rigger which is moored at Skeppsholmen. This fully rigged ship was built in England in 1888 and since her arrival in Sweden in 1915 has served as a training vessel making several around the world voyages.

Threatened with being broken up, the Stockholm City Museum saved the ship from demolition and after refitting, the ship now serves as a 285 bed youth hostel. The deck bar is open to the public from 3.00 p.m. each day and is a delightful spot to sit and relax as the sun sets over the city. The perfect end to yet another lovely day in Stockholm!