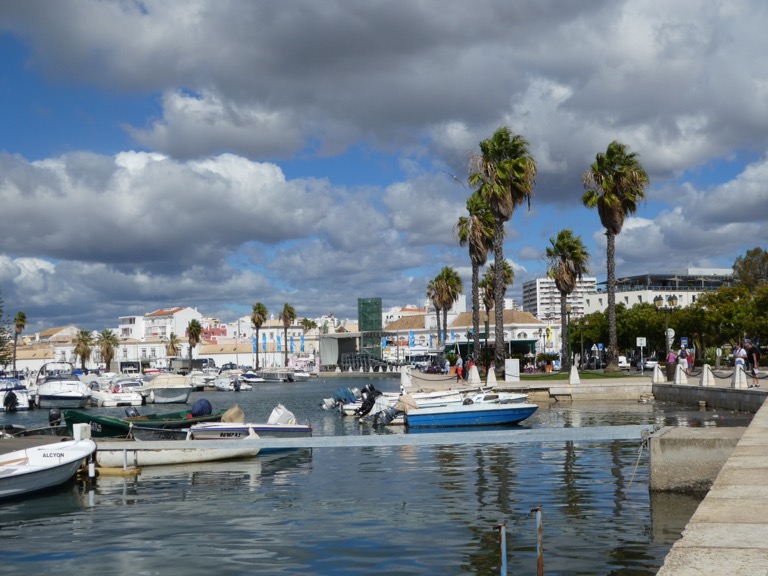 Although we flew into Faro airport last Saturday we didn’t see anything of Faro itself and as it’s an historic city as well as being the capital of the Algarve we thought it would be a  good place to visit.  Trains from Lagos to Faro take 1 hour 50 minutes and an adult return journey costs €14.80.  There wasn’t too much to see from the train window apart from the occasional golf course and much parched scrubland so we just sat back relaxing reading our Kindles.

The railway station in Faro is located in the centre of town between the bus station and the marina and so we began our tour of the city with a stroll along the waterfront.   As there is a height restriction at the marina entrance because of the railway bridge, only small motorboats can moor here. Across from the marina lies the Jardin Manuel Bivar, a small park with flowering bougainvillea and large trees providing welcome shade in the summer months.  Next, we admired the ‘Arco da Villa’ an ornate archway which leads into the old town ‘Citade Velha’.  This gate was designed in the 19th century and is positioned in front of the ancient city walls. Strolling through the arch we continued along a narrow cobbled lane which took us to the Old Town Square, home to both the City Hall and the 13th century Cathedral which had to be rebuilt after suffering earthquake damage in 1775.  Entrance to the cathedral costs €3.50 which includes access to the bell tower affording some splendid views over the Atlantic coast, outlying islands as well as the terracotta tiled rooftops of Faro down below. After spending more time exploring the maze of narrow alleyways we found an inviting bar for lunch then made our way over to the newer part of town.   The town centre is quite compact but we enjoyed wandering along the pedestrianised Rua de Santa Antonia with its mosaic tiled pavements.  Here we found a mix of designer stores, shops, galleries and cafes whilst buskers entertained shoppers with catchy tunes on their piano accordions. Returning to the seafront through the Western Gate ‘Porto da Sol’ we noticed kiosks offering one hour boat trips to the Ria Formosa Natural Park so we booked tickets for the 3.00 pm departure costing €10 each.   Just four of us were taken out of the harbour in a small wooden boat,  heading to the Natural Park which is a protected wilderness of salt water lagoons and tidal flatlands attracting around 270 species of birds and wildlife.  High tide had just occurred an hour earlier covering the mudflats with approximately 10 metres of salt water. The mudflats are covered in samphire, a vegetable that grows naturally in saltwater marshlands.  Our skipper turned off the engine at several locations, allowing the boat to drift slowly and for us to try and spot some of the birds who live in this natural habitat.  Many birds could be seen in the distance and I could hear the sounds of a curlew, but without binoculars it wasn’t possible to see any close up. Before returning to the shore we were taken along the coast for some views of the city.  It felt quite chilly on the water as there was a stiff breeze blowing but we soon warmed up when we were back on land.

We returned on a late afternoon train arriving back into Lagos around 6.00 pm.  Two hours by train each way was quite a distance but we felt the journey had been worthwhile as Faro is an interesting city, albeit smaller than we had expected but with plenty to see and do during our visit.

Goodnight Blackpool, it was lovely visiting you! #blackpool #blackpooltower #lancashire #sunset #northpier
Enjoying a ore-theatre meal @beachhouseb overlooking the sea in Blackpool. The food is delicious and the atmosphere buzzing #restaurant #Blackpool #Bistro
Satisfying my wanderlust @destinations_shows taking place at Event City in Manchester until Sunday. So much to inspire me plus cooking demos, photo workshops and talks. Why not come along this weekend for a great day out and some travel ideas #destinationsshow #eventcity #manchester #travel #wanderlust #lovetravelling #travelshow #loveribblevalley
Wandering through Moscow's Red Square is like stepping into a fairytale. You might like to read about my visit in my latest blog post
Wish they were more heritage signs such as this one around our railway stations. I always need to pause and admire the Scottish terriers #scottiesofinstagram #scottiedog #scottishterrier #edinburghwaverley #vintagesigns
Wishing everyone a Happy New Year #happynewyear #2020 #newyearseve #newyear #lovetravelling
Festive greetings from Edinburgh. Read about our pre-Christmas visit in my newly published blog post #edinburgh #edinburghchristmasmarket #Scotland #visitedinburgh #lovetravelling #lovetravellingblog
Wishing everyone a very Happy Christmas #Christmas #skating #IceSkates