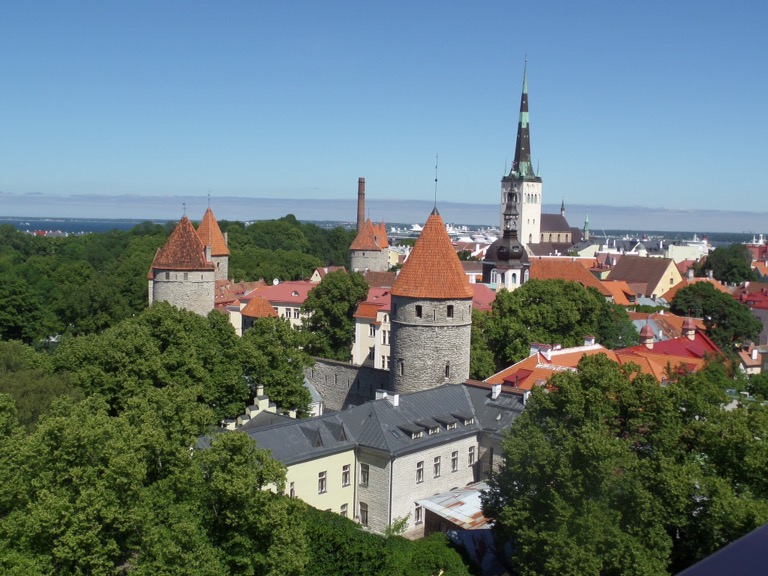 During the night we experienced a thunderstorm with heavy rain but thankfully it had passed by morning although it was a dull start to the day.  After an early breakfast we travelled into Helsinki in order to take the 8.30 am Eckerö Line ferry across to Tallinn in Estonia.  Over the years we’ve made many visits to Tallinn, sometimes for the day and at other times staying overnight in a hotel.  There are several ferry companies operating this route and although Eckerö are not the fastest they offer a comfortable service on the modern M/S Finlandia on which we were travelling this morning.  The ferry leaves from Helsinki’s West Terminal which we accessed by tram and takes two and a half hours so there’s plenty of time to relax, wander round and enjoy a morning cup of coffee.  Entertainment is provided and the duo pictured below performed a couple of sets on both the outward and return journeys, playing both Finnish and English melodies.

On leaving the ferry it’s about a 15 minute walk to the old town with its fairy tale like buildings and onion shaped domes.  The Hanseatic main square is picture perfect and has been a market place since the Middle Ages.  The delightful old buildings, many of them now cafes and restaurants have attractive wooden terraces adorned with flowers – petunias and geraniums being the most popular during our summer visit.

Often we’ve seen craft markets and medieval festivals taking place in the square but today it was only filled with tourists but that didn’t spoil our visit.  We found a place for a coffee and a chocolate croissant then wandered further round the historic city.  Our stroll took us up the cobbles and stone steps to Toompea, the upper part of the old town.  Here we visited the Toompea Castle, now the home of the Estonian Parliament before walking along the city walls to several of the lookout points from which one can view the red tiled old town rooftops, church spires, onion shaped domes and the harbour beyond.  Blue sky appeared and the sun came out for a few minutes but shortly afterwards it clouded over again.

We continued our stroll to the St. Alexander Nevsky Cathedral, the Russian looking onion domed church which was established in 1223 but has been rebuilt several times since.  It’s possible to climb to the top of the Baroque Bell Tower but as we’d done this on a previous visit, we didn’t go up again today.

From here, we headed down to the marina for a walk round the harbour as its always interesting to take a look at some yachts but it then started raining so we continued on to the new town and took shelter awhile in the Viru shopping centre which has a varied assortment of stores with a Rimi supermarket in the basement.  There wasn’t really anything that we wanted to buy so after the rain had eased off a little we ventured outdoors again and returned to the old town passing the flower market on our way to the walled entrance gate.

Feeling ready to eat, we made our way to ‘Hell Hunt’ a craft micro brewery we’d eaten at on a previous visit and enjoyed.  Unfortunately it wasn’t nice enough to sit out on the terrace but we found a window table instead which was very pleasant.  We both chose duck fillet with a plum sauce and sweet potato purée and to drink, tankards of the light Helle beer.

There was still plenty of time before our return ferry was due to depart so we wandered slowly back towards the terminal, stopping in one of the many drinks supermarkets for some bottles of wine to take back to Helsinki with us as its much cheaper here in Estonia.

Back on the ferry we sat in the main lounge and although we felt quite sleepy, we enjoyed the entertainment again, watching people dance and the magician enthralling children and adults alike performing his tricks.  The boat docked on time and we returned to our apartment by tram and bus after an enjoyable day trip to Tallinn despite mixed weather.