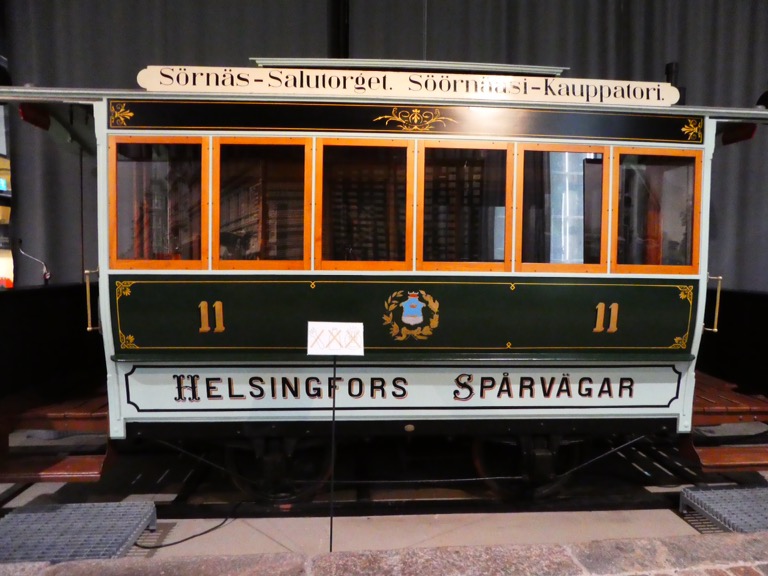 Being a lover of transport museums around the world, I couldn’t resist a visit to the Helsinki Tram Museum which is located in the Töölö district of the city in a former tram depot.  Admission to the museum is free and it is open each day between 11.00 am and 5.00 pm.

Starting our tour around the museum, we learnt that tram line construction in Helsinki began in 1890 and by the following year horse drawn trams were running on the 8.5 km network.  In those days there weren’t any stops and passengers just needed to raise their hands at the side of the track to request the tram to stop, resulting in some very long journeys.  Horse drawn trams were pulled by single horses running three hour shifts.  The city is reasonably flat but for steeper uphill sections a second horse was harnessed to help to spread the load.  The displays told us that the museum was formerly the Ruusula Villa which housed horse stables for the tram horses, a wagon shed and saddle workshop.  Following the introduction of electric trams the site was transformed into a modern depot and is now the Tram Museum’s permanent home.

As with other large cities, the Helsinki tram network expanded as the city grew as trams offered a quick and cheap means of transport.  By the 1930’s the city’s tram traffic hit its peak with 169 motorised trams on the network, carrying over 60 million passengers each year.  Trams sadly fell out of favour in the 1960’s when more households bought their own cars which caused constant traffic jams in the city centre with trams running on the same stretch of road as motor vehicles, some even called for the tram network to be disbanded.  Thankfully, this didn’t happen and road layouts were changed to allow separate lanes for trams to ease traffic congestion.

It was interesting to note that lines were originally colour coded (we still use this system on the London Underground) as illiteracy was prevalent and if passengers remembered the colour they needed, they could get to their destination without problems.  In the 1920’s numbers and letters were introduced to identify routes – routes to the suburbs were allocated letters whilst all other routes were given numbers.

Wandering around the museum hall we were able to clamber on board the lovely old wooden trams, sit in the driver’s cab and pretend we were driving along the city centre cobbled streets feeling we had been transported back to bygone days of the city.

An interesting section of the museum related to payment systems.  The first tickets were re-useable tokens before paper and cardboard tickets came into use.  Tickets were either punched or stamped by the conductors but since 1987 tram drivers have taken sole control of the trams, driving and collecting fares as passengers board from those who do not have pre-paid travel cards.  Children and (big children like me) loved stamping our tickets in the same way it was done in the olden days – so very different from the electronic card readers we use today.  I have kept my old fashioned, stamped ticket and I will use it as a souvenir bookmark to remind me of my visit.

So, if you are like me and have an interest in historic public transport,  do call into Helsinki’s Tram Museum for a step back in time – I’m sure you’ll enjoy it and return with a feeling of nostalgia as you board one of the city’s modern trams back to the centre of town.

To ride a vintage tram just go to the market square at weekends during the summer months.  Tickets cost €5 and the tour takes around 20 minutes.  If you might wish to take a ride on the beer tram you also need to obtain a ticket.  The beer tram route is 40 minutes so you will have plenty of time to enjoy your glass of Finnish beer whilst rattling around the city streets.  The pub tram can also be booked for private parties, a stag party with a difference, perhaps!

A walk to Tervesaari island, Helsinki

The Arabia district of Helsinki