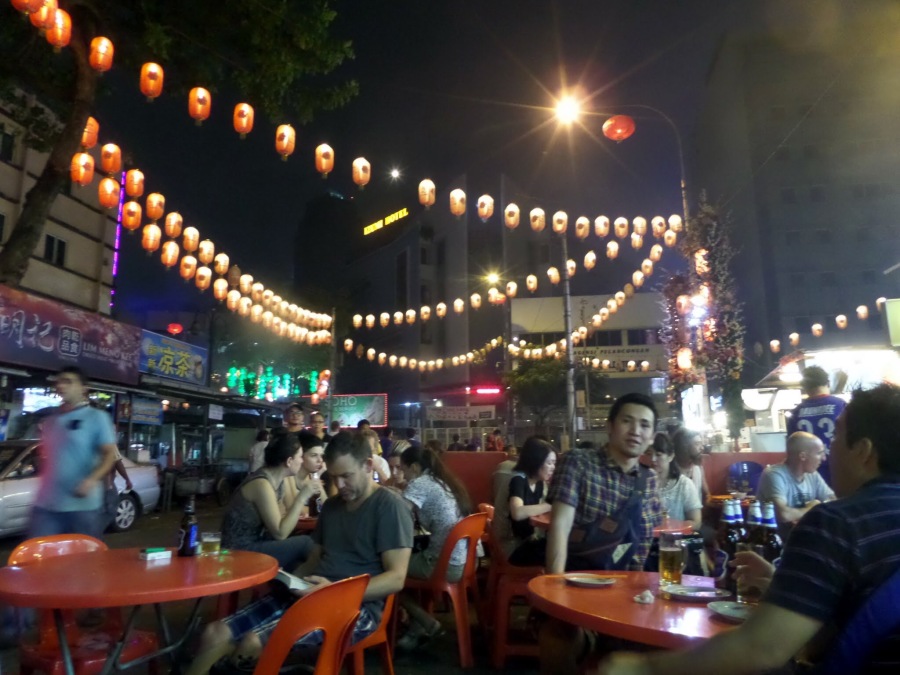 After a leisurely breakfast in the hotel’s Green Apple restaurant we took a train to Putrajaya which is the administrative capital of Malaysia and a planned city.   The railway station is too far from the centre to walk so we waited a short time for a bus to the main square.  The bus fare was RM1 (no change given).  The main Putra square is elegantly laid out with wide streets and attractive floral borders.

In front of us was the modern Putra Mosque with its Islamic inspired architecture and to our right  the majestic offices of the Prime Minister of Malaysia.  Opposite we could see a waterway opening into a lake.  Walking down some steps we came to a European style promenade with several cafes and restaurants where boat trips were just departing.   We would probably have taken one of these, but we missed one by only five minutes and didn’t wish to wait a further 90 minutes for the next trip.

To return we caught the bus back to the railway station then a train to KLIA airport.  Outside the Arrivals Hall a free shuttle bus runs every 20 minutes to the newly opened Mitsui Outlet Park .  It was a public holiday commemorating Malaysia Day and many people had decided to spend some time at the outlet park.

The outlet only opened three months ago and currently there are 180 outlets in the first phase of construction.  Most of the leading brands have a presence there and we picked up some good buys whilst looking around.

On passing the food court we were tempted into eating freshly made waffles.   Spread on mine, I chose Kaya (a fruit curd made from coconut, eggs and sugar) which tasted delicious.  I’d heard of Kaya but hadn’t sampled it before, and didn’t really know what it was.

It was 6.30pm when we returned to our hotel for a rest and at around 9.00 pm we wandered around to Jalan Alor for dinner.  As we passed Low Yat Plaza in Bukit Bintang we noticed many police and their vehicles lining the road.   In Chinatown earlier in the day there had been a large protest march by the Red Shirts.

Police were taking no chances in case of any trouble.   Fortunately we didn’t see the protest ourselves.  The majority of Jalan Alor’s restaurants were closed ahead of the protest but we were able to find seats in one of the establishments that had remained open. Finding somewhere to sit we tempted our tastebuds with Drunken Chicken and Garlic Prawns.  The waiter wasn’t taking any chances in case of the protest getting out of hand, and requested payment with our order.  This was presumably to cover themselves if trouble broke out and the diners had to hurry away.  Thankfully there were no incident and we enjoyed our delicious meal in peace.

Let's look forward to the days when we can travel once again. Cornwall is so pretty with delightfully named villages such as Mousehole which I've featured here. For inspiration of things to see and do in Cornwall you might like to click on my smart bio to read about Day 2 of my recent road trip featuring St. Michael's Mount, Penzance and Mousehole @visit.cornwall @lovepenzance @lovemousehole #penzance #stmichaelsmount #mousehole #newlyn
Back in October just before lockdown restrictions were imposed we enjoyed a ten day road trip to Cornwall. The break got off to a great start as we spent a few hours in lovely Taunton. You might like to read about our time there in my newly published blog post. Can't wait to be able to return to see more of Somerset! @visit.somerset @visit_taunton #somerset #taunton #plannowtravellater #staysafe #travelblogger
Those pastel coloured cottages help to make Bristol harbour so picturesque, don't you think! #bristol #bristolharbour #bristolharbourside
First signs of springtime in my garden, such a cheerful sight! #spring #springtime #snowdrops
Did you know that Birmingham has more canals than Venice ? It's a fascinating city and one we can all look forward to visiting when it's safe to do so. Find out more in my newly published blog post by following the link in my bio. @visit_birmingham #birmingham #westmidlands #dreamnowtravellater #visitbirmingham
It's exactly three years since I visited Tampere. I'm counting the days until I can return as it's such a beautiful part of Finland @visittampereofficial #finland #tampere #wishiwasthere
Happy Lunar New Year! It's so sad that we won't be able to experience Chinese New Year celebrations this year. Loved watching the lion dancing in London's Chinatown last year. #chinatown #chinesenewyear #liondance #chinatownlondon #memories #lunarnewyear #happylunarnewyear
Up, up and away. Taking the cable car up to the Upper Rock Nature Reserve in Gibraltar is something to look forward to when we can all travel once again. Find out more by clicking the link on my bio to my newly published blog post. @visitgibraltar #gibraltar #cablecar #dreamnowtravellater