After a delicious breakfast in the Park Plaza Vondelpark’s restaurant we set off bright and early to visit some interesting places outside of the city.  After taking Tram line 2 to Central Station we caught a train to Enkhuizen one hour away.  Standard single fares are €13.20 each but by purchasing online tickets we saved €1 per ticket.

We found seats on the train’s upper deck so we could make the most of the views along the way.  On reaching Enkhuizen we followed signposts to the Zuiderzee Museum which led us along the harbourside through the pretty town passing the archway of the Defence Tower on our way.

In addition to walking to the museum, visitors can also arrive by ferry, crossing the IJsselmeer (included in the standard ticket price of €18).  The ferry also calls at the landing stage of the museum car park for those travelling by road.

Zuiderzee is the Netherlands largest outdoor museum comprising a complete village and harbour and is open between April and October.  The museum first opened in 1983 and every one of its buildings including houses, cottages, farms, shops, the school and church date from 1880-1930 and had to be transported here brick by brick from around the Zuiderzee region.

Wandering around the folk museum was like stepping back in time as it felt like a truly authentic experience.  The staff wear traditional costumes of the period for their type of work and there are actual shops to walk inside including a bakers, butchers, chemists and a sweet shop.  In the post office, there’s even an opportunity to buy postcards and have them franked with a museum stamp before posting.

It really is an enchanting experience to saunter along the cobbled lanes of brightly painted gabled houses.  Along one street washing was drying in the breeze and the ‘neighbours’ were sitting around a small table enjoying their morning cups of tea in the sunshine and chatting to us as we passed along.

We popped into the brush-maker’s workshop and observed how traditional brush heads were made and in the coopery we watched an artisan hard at work making wooden barrels.

The village setting is truly beautiful with small bridges crossing the canal, a village church and a school with coat pegs in its entrance hall and two classrooms each with wooden desks complete with inkwells, blackboards and chalk.

The harbour is attractive too and is a replica of the one built in 1830 on what was then the island of Marken.  Numerous old sailing vessels are moored there and we admired them as we strolled around.

In the far corner of the village stands a 19th century windmill, a sight synonymous with the Netherlands.  The Dutch used these windmills to pump the polders (large areas of land encircled by dykes) dry by lifting the water up and diverting it into canals.

The museum has a pleasant cafe/ restaurant from where we collected packed lunches which can be ordered when purchasing tickets.  These can either be eaten in the cafe or if it’s warm and sunny, enjoyed on one of the picnic benches scattered around the village.  I can recommend the packed lunch as it contained two delicious filled rolls, a currant bun, piece of fruit and bottle of water.

There is also a fish smokehouse where herring and salmon can be bought at a reasonable cost.  We were looking forward to sampling a herring each but sadly they were not quite ready when we were around that part of the village.

I would definitely recommend visiting the Zuiderzee Museum as it is one of the best open-air museums we have ever visited.  All the staff we came across were obviously passionate about their roles and the ancient crafts they demonstrated and talked about.

At various points information panels are to be found where visitors can press a button to hear stories of village life.  All signage is in both Dutch and English and the museum is a lovely day out for all ages and especially those with an interest in social history.  We managed to see everything in three hours but at busier times I would allow longer to get around.

The museum also has an indoor section which is open all year and features an interactive exhibition entitled ‘Sea of Stories’ together with a collection of historic boats in the Ships Hall.  This explains that the Zuiderzee was once part of the North Sea but following a series of floods the 32 kilometre (19.9 mile) Afsluitdijk was built.  On its completion in 1932 the Zuiderzee was then completely cut off and became a lake called the IJsselmeer.

We could have taken the ferry back to the railway station but opted to walk so that we could spend some time exploring the charming harbour town of Enkhuizen.  This pretty little town was once one of the most prosperous in the Netherlands as in the 17th century it gained power as a member of the Dutch East India Company.

Back at the station we returned to Amsterdam by train and from there made our way to the bus station at the rear of the railway station overlooking the IJ.  It was our plan to take another trip out of the city centre and to spend the afternoon in the picturesque villages of Volendam and Marken.  Getting there was easy, as we took Bus 316 which reached Volendam in 35 minutes.  Rather than buy separate bus tickets we used Amsterdam Regional Travel Tickets ARTT valid on bus, tram, train and metro for periods of 24 – 72 hours which can be more cost effective if making several journeys.

Volendam’s promenade, De Dijk has a lively atmosphere with its rows of gabled houses, shops and cafes each with attractive outside terraces.  At the seafood stall we spotted a heron on the lookout for some fish.  It’s unusual to see herons in places like this as they are notoriously shy but this one has obviously learnt where rich pickings are to be found.

After strolling along the promenade we called into Experience Volendam (tickets €8.75 for a 30 minute activity tour).  In this interesting museum we were shown around by a lady wearing a traditional Dutch long dress and a high pointed white bonnet.  She explained what the interior of a small house in Volendam would have looked like a century ago.

She went on to tell us about the Volendam flood disaster of 1916 when most of the village was destroyed.  We then experienced this disaster ourselves by using virtual reality glasses whilst sitting in a wooden boat.  This was extremely well re-created as we were immersed into the life of a young fisherman who went out in a boat and survived the flood disaster.

Afterwards there is an option to dress up in local costumes and have photographs taken as souvenirs (at extra cost).

We then continued our walk around the charming village, finding an attractive small cafe for a glass of beer before popping into the Cheese Factory shop and museum (admission free) which was also very interesting.

Here, we saw how the cheese used to be made contrasting with how it is produced today.  The museum extends over two floors alongside a large shop where complimentary cheese tastings are available.  I had never realised that there were so many varieties of Dutch cheese and guess what, I liked them all.

Leaving there, we enjoyed a walk along the top of the dyke passing a small beach before arriving at the Volendam Marken Express jetty just in time to take the 17.15 boat across to Marken (€9 single, €14 return).  The sun had disappeared and it had turned a little chilly but we still opted to sit out on the upper deck to enjoy the views and the fresh air on the 30 minute crossing.

Marken is a former island, now connected by a long causeway to form a peninsular.  It’s quieter than Volendam but equally scenic and a popular seaside village with its green wooden houses overlooking the harbour.  These homes have been built on stilts or clustered on artificial small hills two or three metres high to provide extra protection against high tides.

We thought that Marken was a delightful little village from its smart cafes, shops and restaurants along the waterfront to its maze of narrow lanes behind interspersed with narrow canals and white drawbridges.

There are also some pleasant coastal walking and cycling routes around the island which extend to 9 km.  These include to a lighthouse standing on the eastern most tip that dates from 1839 which was declared a national monument in 1970.

After enjoying our walk through the tranquil village we returned to Amsterdam on Bus 315.  This route took us to Amsterdam Station Noord and from there it was easy to return to the centre by metro.

We concluded our fun filled day outside the centre with dinner in a cosy pub in the Prinsengracht district of Amsterdam.  I do hope that by documenting our visits to the Zuiderzee Museum, Volendam and Marken you might be inspired to add these places to your Amsterdam itinerary as they are all easy to reach by public transport and well worth the trip out of town. 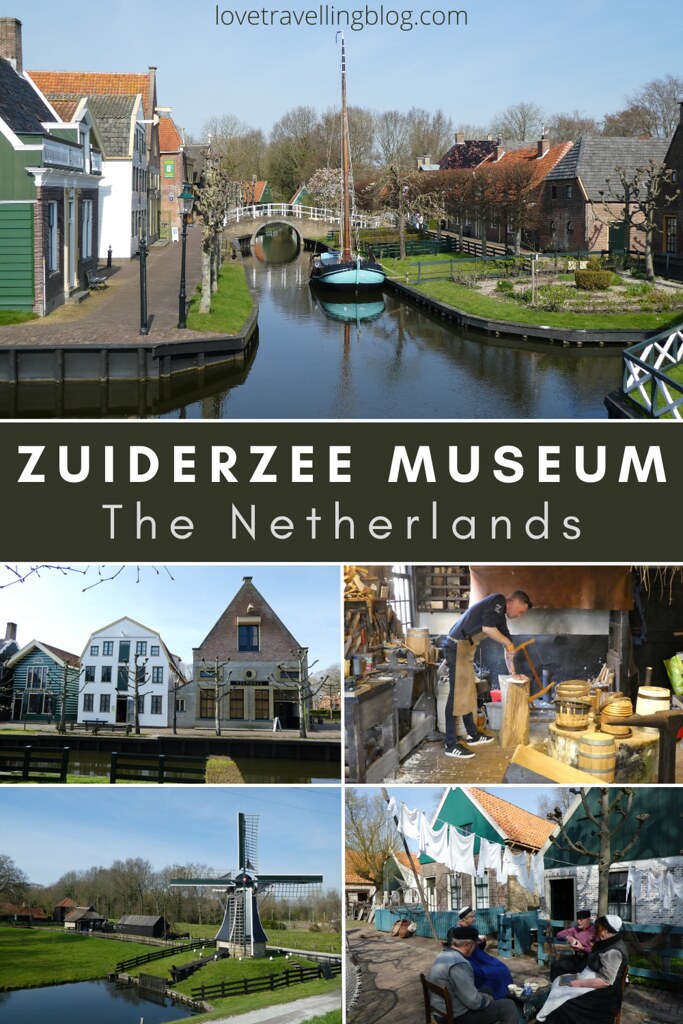