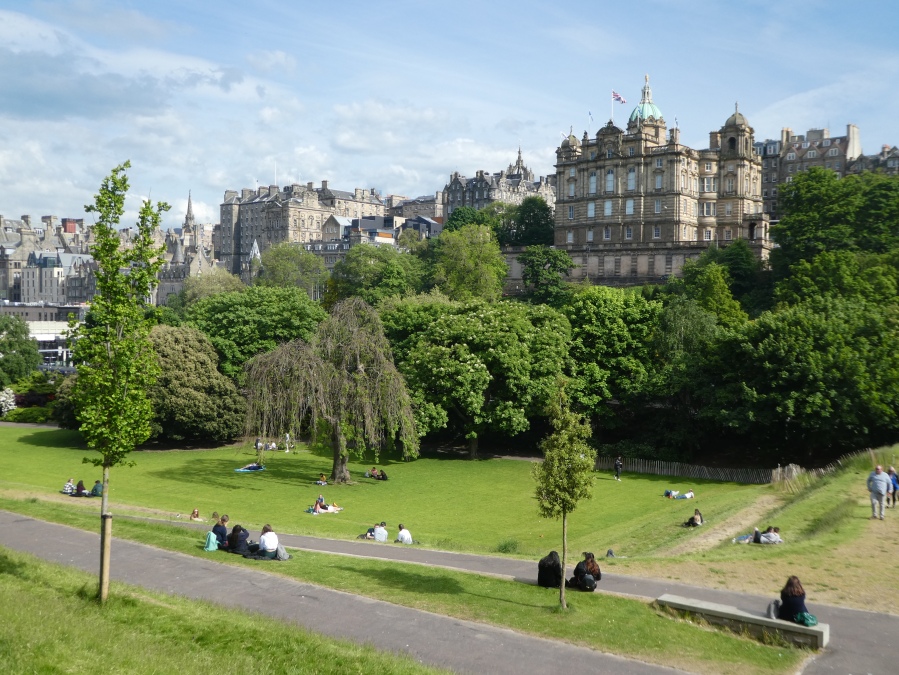 It had been more than a year since my last visit to Edinburgh and I couldn’t wait to return to one of my favourite cities.  We travelled north on board an LNER train which whisks passengers from London in just four and a quarter hours.  If you plan to travel by train try to book seats on the right hand side of the carriage so that you can enjoy the wonderful sea views as you head north.  We admired views of Berwick-upon-Tweed, the northernmost town in England from the train windows as we travelled north.

It was around 1.30 p.m. by the time we arrived into Edinburgh Waverley Station and as always I was in seventh heaven to be walking out onto Princes Street in beautiful sunshine to the sounds of bagpipes.

After popping into the Booking Office bar just outside the station for a quick snack we were ready for an afternoon walk re-acquainting ourselves with this fine city.  Our first stop was in Edinburgh’s new town which is a UNESCO World Heritage Site.  Charlotte Square is located at the western end of George Street and Bute House overlooking the gardens is the official residence of the First Minister of Scotland, Nicola Sturgeon.

Standing in the centre of the square is a memorial to Queen Victoria’s beloved husband Prince Albert who died at the young age of 41 in 1861.  He is depicted on horseback in the private gardens.

From there we continued along to Lothian Road passing the stunning Edwardian Usher Hall on our left.  The concert hall was built in 1914 and can accommodate up to 2,200.  I’m yet to attend a performance there but have seen some excellent plays next door in the equally beautiful Royal Lyceum Theatre.

Not far from there we passed the arched entrance to the old Edinburgh Meat Market before reaching Lochrin Basin at Fountainbridge which lies at the eastern end of the Union Canal.  Completed in 1822 the canal was built to connect Edinburgh to the Forth and Clyde Canal to allow coal and other goods to be brought into the city by boat.  We’d arranged to stay in an Aparthotel here and our 8th floor studio had panoramic views along the canal from its floor to ceiling windows.  After settling in, and finally dragging ourselves away from the windows we set off for a walk along the towpath.

From information boards along the canal bank we learnt that with the advancement of the railways the canal had fallen into disrepair in the 1930’s but in recent years a regeneration programme led to the canal being a popular place for leisure boating and walks along the towpath.  The canal was re-opened in 2001 although the link to the Forth & Clyde wasn’t restored until the following year.  The Union Canal does not have any locks apart from a few at its far western end near the Falkirk Wheel but it does have some interesting bridges.

Located around the canal basin are moorings occupied by colourful narrow boats, some privately owned whilst others are leisure boats for hire.  The old industrial buildings have long since gone and in their place are now swish apartment blocks, offices, bars and restaurants all taking advantage of the tranquil waterside setting.

It wasn’t long before we had arrived at the historic Leamington Lift Bridge which is the only hydraulic bridge to cross the canal.  This impressive piece of engineering is designed to raise the road allowing boats to pass underneath.  Moored just in front of the bridge is the Watershed Canal Boat Cafe adorned with pots of flowers on its roof and tables set out on the towpath, it’s a peaceful spot to relax with a coffee and watch the world go by.

Our walk took us slightly further onto Viewforth Bridge where we crossed over the canal and paused to admire the views on either side.  Etched on one side of the bridge is the coat of arms of Edinburgh and on the other that of Glasgow as the Union Canal joins the two cities together with a little help from the Forth & Clyde Canal.

We left the canal bank at this point and returned to the centre through Bruntsfield and Tollcross before heading down to Grassmarket.  This was once a busy marketplace for horses and cattle and takes its name from the grass and hay they ate rather than of the goods traded.

Nestled in the heart of the old town, Grassmarket affords stunning views of the castle and is one of the most picturesque and lively parts of the city.  The cobbled square is lined with small shops and numerous bars and restaurants, all looking very continental with their tables spilling out across the square.

Victoria Street leads up from the far end of Grassmarket and this steep, winding street with its colourful buildings is a photographer’s paradise.  This pretty street gently curves uphill and is full of charm with an upper terrace on the north side adding to its appeal.

The buildings are of old Flemish style and contain may small independent traders including IJ.Mellis, a traditional old fashioned purveyor of Scottish cheese and Swish, an attractive boutique stocking clothing and accessories.

Continuing our afternoon stroll we walked down The Mound which links the old town to the new town.  At its lower end, it provides access into the Princes Street Gardens and the Scottish National Gallery.

Walking through Princes Street Gardens, there are splendid views looking up to the old town and of the Bank of Scotland’s head office and its museum on The Mound, which is free to enter and takes a fascinating look at money.

Standing proud in Princes Street Gardens is the Scott Memorial built in honour of the Scottish author Sir Walter Scott.  This Gothic monument is one of the world’s largest monuments to a writer.  The spire is decorated with 64 figures representing characters from the writer’s novels.  When it re-opens visitors can climb the 287 steps to the top for some breathtaking city views.

We’d had a lovely few hours re-visiting some of our favourite haunts in Edinburgh and where better to round off the day than with a glass of local gin at the Edinburgh Festival in its pop-up garden next to Waverley Station.  Don’t worry if you’re not a gin drinker as it’s not just about gin as other drinks are on offer, plus a mouth watering selection of street food. 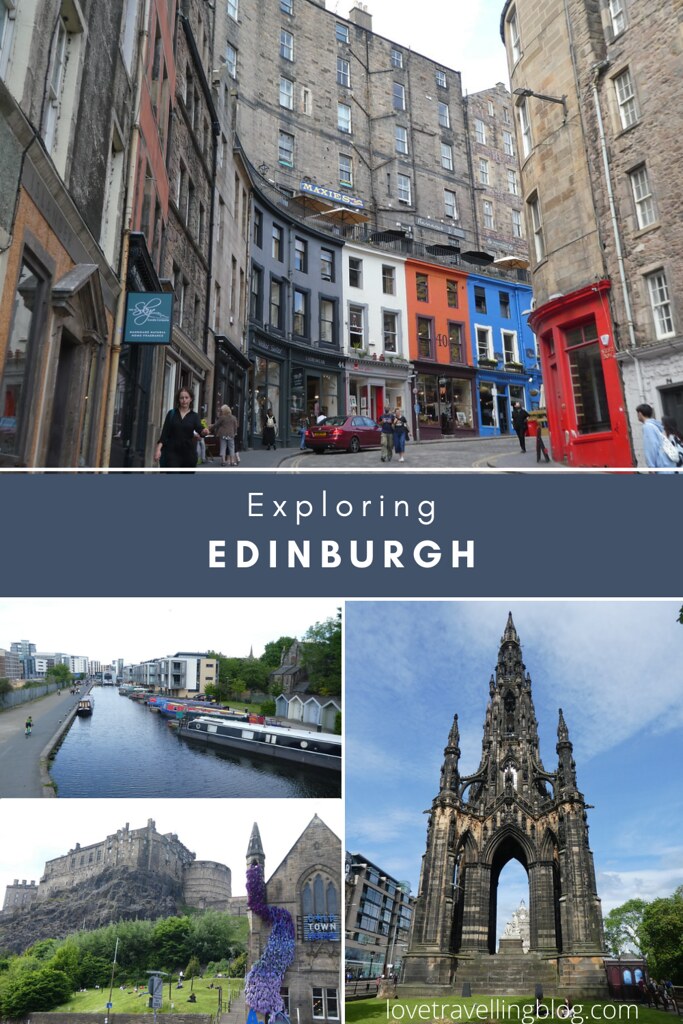