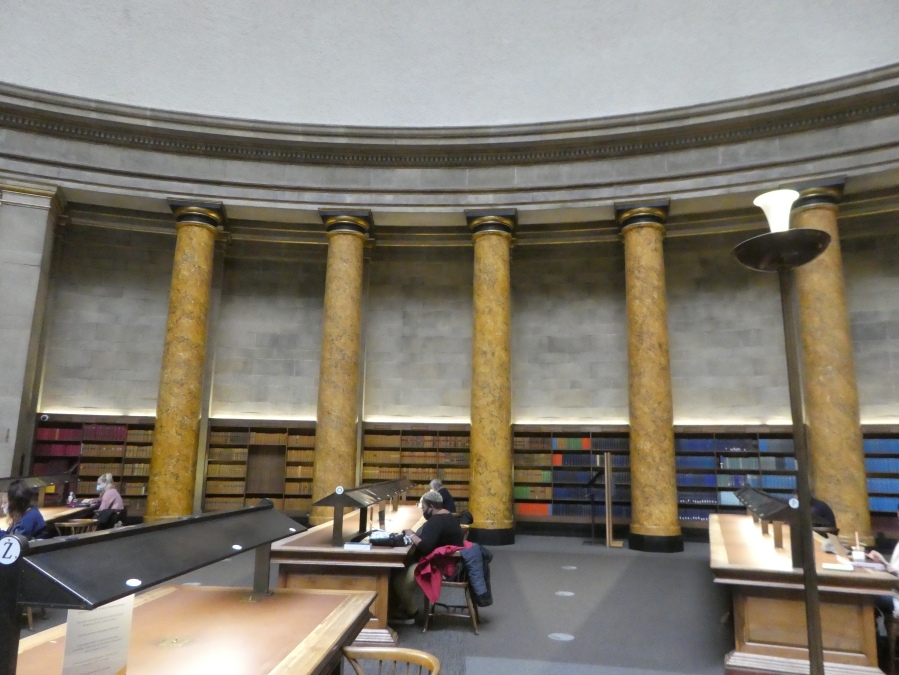 It was a dreary, damp morning as we made our way to the station for our weekend in Manchester.  Conditions were no better on our arrival and as there seemed little likelihood of the rain easing we decided to spend as much of the day as possible indoors.

We were more than happy to be back in one of our favourite cities whatever the weather and after enjoying a pub lunch we headed to Manchester Central Library in St. Peter’s Square.  This city centre landmark which opened in 1934 is sometimes compared to the Pantheon in Rome with its striking rotunda and huge stone pillars.

We entered the building by its main door which leads into a vast two storey entrance hall featuring a huge stained glass window of William Shakespeare and scenes from his plays above the door.  Staircases at each side of the hall lead up to the galleried landing which affords splendid views of the heraldic ceiling decorations.

We’d come upstairs to view two of the library’s magnificent rooms.  The first we entered was the Wolfson Reading Room, a magnificent circular hall seating up to 300 and lined with oak bookshelves.  The room is partly lit by natural light from a glass oculus in the centre of the roof dome and by a circle of elegant art-deco style lights.

Over the central counter there is a stunning wrought iron pillar type structure topped by an ornate clock.  The majority of the bookcases, tables, chairs and desk lamps are original making the room conducive to study.

Just down the corridor is another gem, that of the Henry Watson Music Library.  Dr. Watson (1846-1911) was a prominent local musician and teacher who became Professor of Music at the Royal Manchester College of Music.  The music library was founded in 1902 containing his original collection of manuscripts.

It’s another beautiful room with its curved walls and along with the historic collection the library contains musical instruments, mixing decks and printed music making it one of the country’s leading resource centres.

The library is a perfect blend of old and new as following a £50m refurbishment in 2010 taking four years the historic building now includes an ultramodern lending library, local history room and large cafe.

Before leaving, we admired one of the Manchester Bees which can be found dotted around the city centre.  The Manchester worker bee is one of the best known symbols of the city for which it has been an emblem for more than 150 years.  The bee denotes the Mancunian’s hard work ethic and of the city being a hive of activity.

It was still raining when we ventured outside so we made a quick dash around the corner to the Manchester Art Gallery which offers free admission and is currently open Wednesday-Sunday 10.00 – 4.00 p.m.  The original city art gallery building was designed by Sir Charles Barry and fronts onto Mosley Street.  It was completed in 1835 and has since been expanded into two further connected buildings.

The grand Victorian entrance hall features spectacular neo-classical architecture and artwork leading into the exhibition galleries.  Despite only being partially open there was ample artwork of local and international significance to view.

Being tea drinkers, hopefully we’ll have an opportunity to return when the tea exhibition opens.  On reading an information board, it will contain a collection relating to the production and use of tea and how a simple hot drink has enriched our lives through meeting people and exchanging ideas.

Leaving the gallery, we popped into The Waterhouse pub located just a few steps away where we enjoyed a panini and drink before heading to the vast Manchester Arndale for a dose of retail therapy.  This mall contains over 200 stores and is one of the largest inner-city shopping centres in the country, so an ideal place to spend some time on such a rainy day.  There are numerous access points with the main ones being along Market Street and Exchange Square.  As well as lots of shops there are numerous cafes and restaurants plus a covered walkway leading to Marks & Spencer and Selfridges, meaning that we could stay dry a little longer whilst browsing these stores.

Before leaving home, I’d booked timed entry tickets for the Manchester Museum on Oxford Road, a 30 minute walk away so we pulled up our hoods, hoisted our umbrellas and made our way across town to the University of Manchester.  The museum lies at the heart of the campus in one of its grand neo-gothic buildings.  Entrance is free and current opening times are Wednesday – Sunday 11.00 – 4.00 p.m.  Our timed slot was for 3.15 p.m. allowing ample time to view the natural history and vivarium galleries.  The ancient world’s gallery is currently closed whilst transformations take place and additional exhibition halls are added.

It was our first visit to this museum and I couldn’t believe how beautiful it was.  The building was designed by Alfred Waterhouse who also designed the exquisite Natural History Museum in London.  It’s both a visitor attraction and a resource centre for research and teaching.

Entering the gallery, we came face to face with Stan the T.rex – a giant plesiosaur hanging from the ceiling and took a tour of life on earth over the last 600m years from the earliest evidence of bacteria through to swamp forests and sea reptiles.

This Victorian masterpiece covers three floors and features ornate balconies with a glass panelled roof.  Displays cover fossils and minerals with a particularly interesting Vivarium on the top floor.  Vivarium is Latin for ‘place of life’ and the one based here is notable for its collection of Costa Rican frogs with a captive breeding programme for some of the most endangered species.

It was interesting viewing some of the exhibits and after completing our visit we called into the  museum cafe next door for a pot of tea and a slice of cake.  The cafe is housed in the former university dental hospital and it’s a cosy place to call in a for a drink before or after visiting the museum.

It wasn’t the weather for a complete walk around the university campus but I did spot an attractive row of Georgian houses which are now faculty offices.  Along with the historic university buildings housing the museum and cafe, we passed some more recent additions and Utility, a splendid independent gift shop on University Green which I couldn’t resist popping into for a look around.

Despite the gloomy weather we’d found several nice things to see and do on our first day back in Manchester.  Fingers crossed for better weather to come! 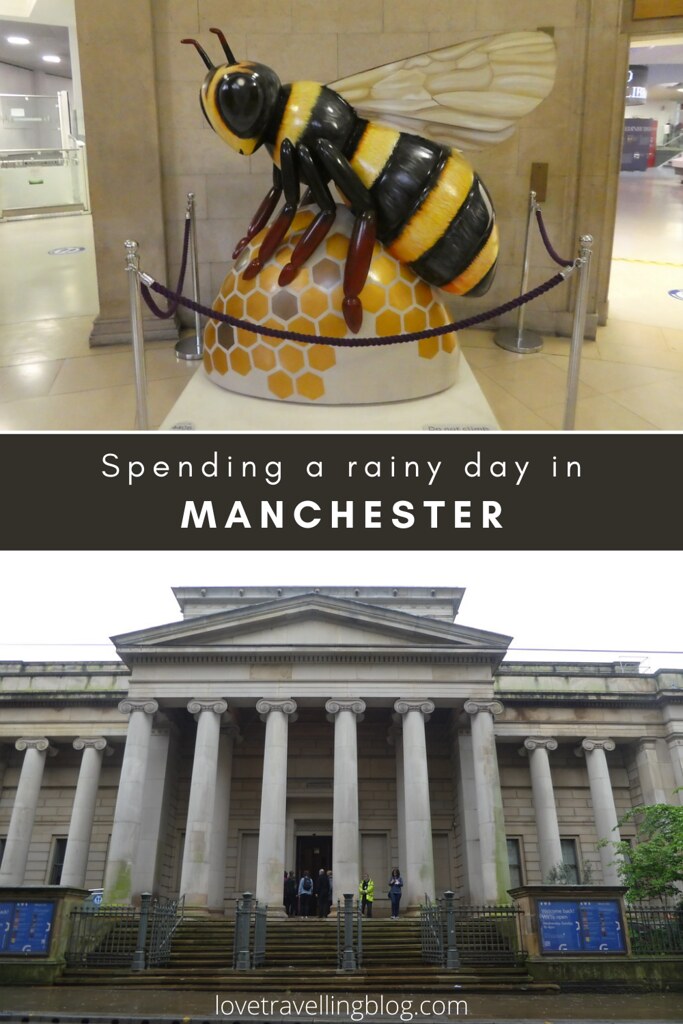 94 thoughts on “Day 1. Visiting Manchester on a rainy day”