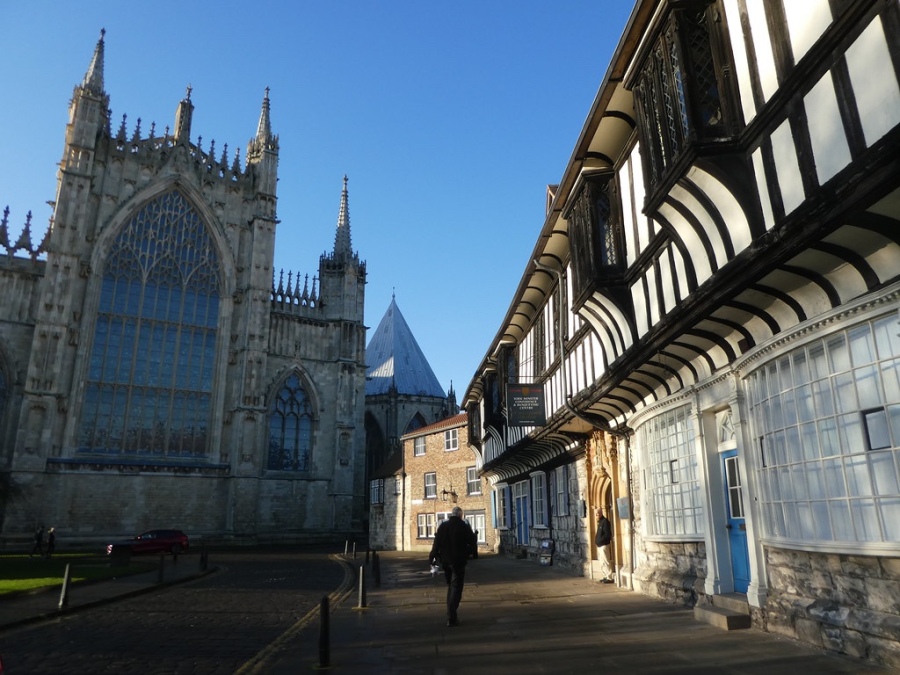 York is easily accessible from all parts of the country with trains between York and London taking only one and three quarter hours meaning that visiting the city can easily be combined with a trip to the capital.

This is one of the world’s most magnificent cathedrals (adult admission £11.50).  This awe inspiring cathedral has an unrivalled collection of medieval stained glass including the Rose Window high in the south transept which is one of the best known stained glass windows in England.

Climb the 275 steps to the top of the Minster’s central tower for stunning city views and then head underground to explore the undercroft where you can inspect the remains of the original Roman barracks through glass floors.  York Minster

Take a walk along The Shambles, a quant old street featuring overhanging timber buildings dating back to medieval times.  It was once a street of butchers but now the small shops are mostly occupied by cafes and gift shops.   The narrow street can get very crowded with tourists but is definitely a ‘must see’ in the city centre.

Join a one hour guided tour which begins with a history of York’s most famous chocolate making families.  Knowledgeable guides show you around and each time the group pauses to look at something, tins of Quality Street or trays of delicious chocolate samples are handed round!

Gain a deeper knowledge of the city’s connections with confectionery and of its famous brands including fruit pastilles, Aero, Yorkie Bars, After Eight Mints and KitKat.

Entrance to the museum is £12.95.  I suggest booking a tour in advance as there are a maximum of 24 places on each one, and as it’s so interesting it would be a shame to miss out. York’s Chocolate Story

Join a boat trip operated by City Cruises – York and included in the York Pass.  Taking the short cruise through the city centre is relaxing and provides a different perspective of this historic centre from the river.  Included is an interesting live commentary focusing on points of interest as well as covering the city’s famous history.

Visit the JORVIK Viking Centre and stand on the site of one of the most famous and astounding discoveries of modern archaeology.  Between the years 1976-81 archaeologists revealed the houses, workshops and backyards of the Viking-age city of Jorvik as it stood nearly 1,000 years ago.

Start your tour in the basement and view the excavations through the glass floor, then continue with a journey in a car holding a maximum of 6 visitors for a ride experience through the sights and sounds of Jorvik.  This takes around 15 minutes and is enthralling and fun for everyone whatever their age.  There’s a touch screen on each seat and passengers can choose to hear the commentary in any one of 15 languages with an option for children’s versions.  Following the ride there are more galleries to explore containing a unique collection of Viking artefacts.  Visiting the museum is £12.50 and included in the York Pass, making it good value.  JORVIK Viking Centre

Start off in the Great Hall, which was a former engine shed until 1968.  It lay in disuse awhile then new life was breathed into it as it became home to the museum, opening in 1975.  On display is Mallard, designed by Sir Nigel Gresley.  This famous engine broke the speed record for steam locomotives in 1938 and it has never been beaten.  Visitors can even relive Mallard’s record breaking run in a simulator experience.

An original turntable is surrounded by an awe inspiring collection of locomotives from the past 150 years and there’s lots more to see such as a high speed Japanese bullet train (the only one of its kind outside Japan).  Moving into the Station Hall, step back in time to explore over 100 years of railway life.

(Standard admission £12 and included in the York Pass). is one of the country’s finest museums and covers 400 years of York’s history with re-modelled Jacobean rooms through to Victorian prison cells.  An undoubted highlight is Kirkgate, a re-created cobbled street with full size authentic shops and people dressed as local characters.

Explore the cells which were once a Georgian prison and inspect some of them including that of the highwayman Dick Turpin, the prison’s most notorious inmate.  There is a clever system of projecting ghostly images onto the cell walls and hearing narratives of their chilling stories of life behind bars.  Before leaving, explore the exercise yard where prisoners had as little as 30 minutes each day to stretch their legs and view the set of stocks and gallows where horrifying hangings took place.  York Castle Museum

Located opposite York Castle Museum.  It’s necessary to climb a steep flight of steps to access the tower as it stands proudly on a high mound.  This is now all that remains of York Castle which was built by William the Conqueror and served as a prison and subsequently a Royal Mint.

Explore the central area and then clamber up yet more steps to the open air walkway at the very top where castle guards once patrolled and nowadays offers some panoramic views over the city’s rooftops.  Cliffords Tower

Take a stroll along the City Walls

It’s possible to complete a circular walk of 2.6 miles (4.2km) following the remains of the original walls although these are no longer complete.  York’s City Walls offer a splendid elevated walk around the city.

The accompanying moats have largely disappeared but the slopes of the ramparts are well known for their display of daffodils in March and April.  There are four main bars, or fortified gateways and two smaller gateways from where you can gain access to the walls.

One section of the medieval walls is in the Museum Gardens, where you can see the best surviving stretch of the Roman fortress wall and the Roman Multangular Tower with medieval stonework above it.  Also in the Museum Gardens are the ruins of St Mary’s Abbey and the precinct walls around two sides of the Abbey.  These walls were built at the same time as the City Walls and are the finest surviving example of Abbey walls in the country.

If you are planning on visiting several of the above attractions then it might be a good idea to purchase the  York Pass, as substantial savings can be made with the one or two day card. 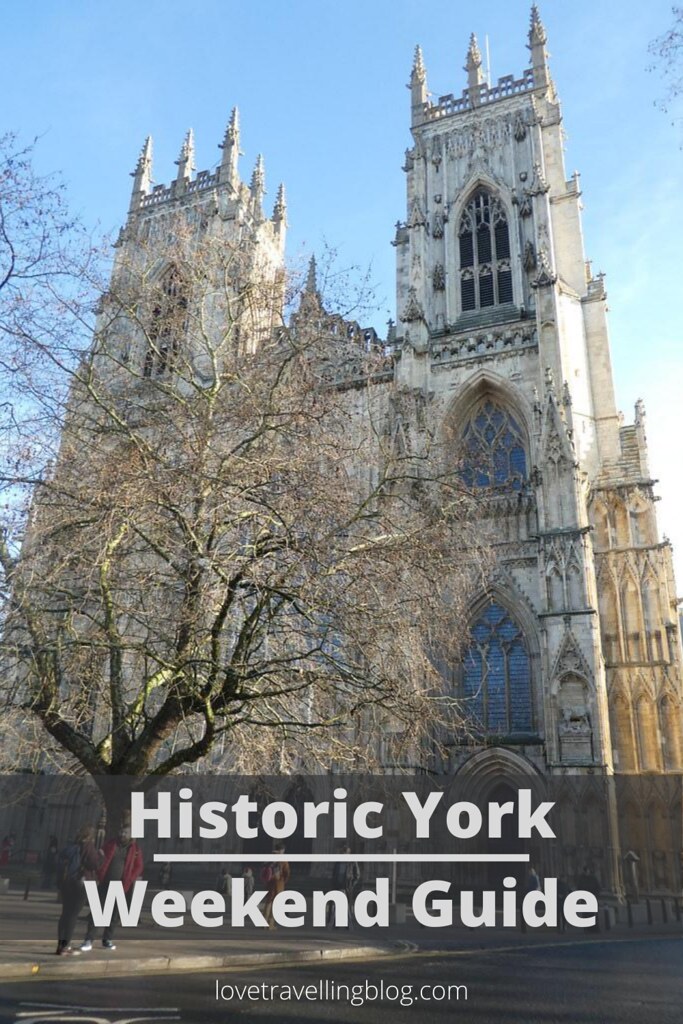