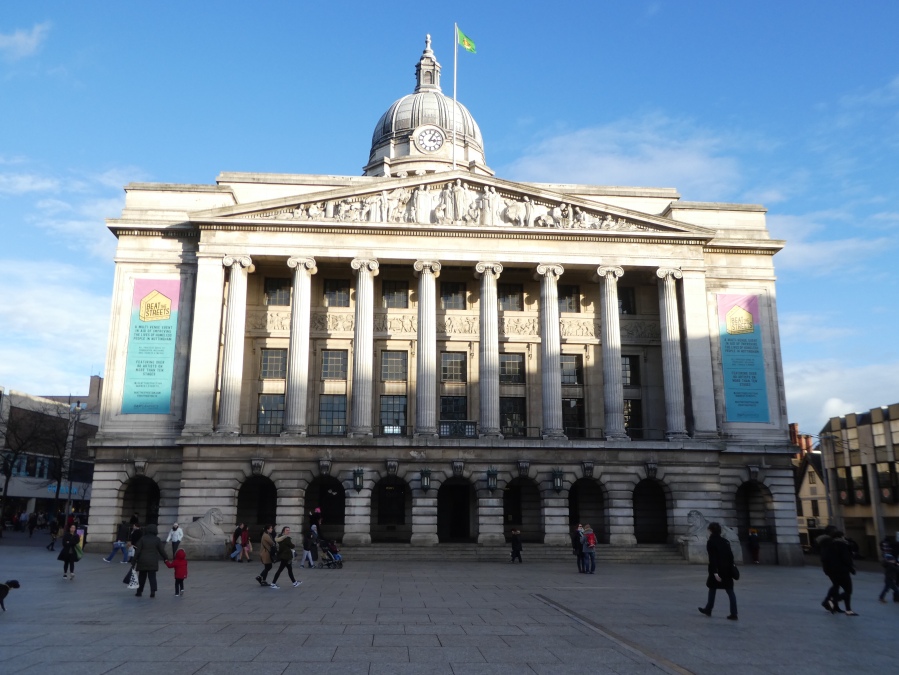 Nottingham is often referred to as the ‘Queen of the East Midlands’ as the English Kings held court there when they went hunting in its surrounding forests.  It’s famous for the legendary Robin Hood, lace making and much more.  Take a look at my guide of things to see and do in this intriguing city.

The city is easily accessible from all parts of the U.K. being only 130 miles from London and just over 2 hours by train, with journeys of less than 75 minutes from both Manchester and Birmingham.

Go underground at the City of Caves located on Garner’s Hill.  It’s hard to believe that there are over 500 caves in Nottingham dating back to the Dark Ages with some pubs still having access to them today through their beer cellars.  Equipped with a hard hat, investigate the social history of the caves and view the only medieval underground tannery in the country.  Explore the Anderson air raid shelter where thousands of people sought refuge during the Second World War and learn about life beneath the city streets.

A five minute walk from the City of Caves lies the National Justice Museum on High Pavement.  It’s located in Nottingham’s old Georgian courthouse and county gaol, the steps of which were the site of many public executions.  Admission to certain parts of the museum are free, with combination tickets available with the City of Caves.  Visitors are given wristbands labelled with a convict’s number which it’s fun to search for in the galleries to discover the crime and length of sentence.

Discover how the law and justice contribute to our lives, meet historical characters and take part in a range of interactive activities including a mock trial.  This event takes place twice daily in the oak panelled Victorian courtroom where trials were still held as recently as 1986.

Visitors are invited to act as a judge and witnesses and are handed laminated narrative sheets with their own parts highlighted.  With everyone in place, the accused is called into the dock and the trial gets underway.  It’s a fun activity for all ages lasting around 20 minutes.

At Weekday Cross stands the Nottingham Contemporary, one of the largest contemporary art centres in the U.K.  The gallery has been open since 2009 and its iconic green and gold exterior celebrates the Nottingham lace heritage with a nineteenth century cherry blossom lace design embedded into the concrete façade.  The gallery offers free admission and its aim is to offer international art to everyone.

Take the tram to High School for a walk through Nottingham Arboretum.  It’s Nottingham’s oldest park and home to a collection of over 800 trees some of which are from the original collection planted in the 19th century.  Enjoy a pleasant stroll taking in the Victorian circular aviary, Chinese bell tower, bandstand and lake.

The University of Nottingham

The University of Nottingham campus covers 300 acres and is regarded as one of the largest and most attractive in the country with its lakeside setting.  The university is quick and easy to get to from the city centre as it has its own dedicated tram stop from which a footpath leads up to the main buildings.

Wander around the lakeside, step across an ornamental bridge and soak up the views from lakeside terrace.  Marvel at the stunning architecture of the university’s Grade II listed Trent Building which opened in 1928 before continuing into the building itself where visitors can view its elegant central hallway and Great Hall.

Before leaving University Park don’t miss taking a look at the majestic stone lions.  These were a gift from Nottingham’s twin city of Ningbo in China to mark a decade of civic partnership between the two cities.  Since 2004 a China campus of the University of Nottingham has been established in the historic city of Ningbo on China’s east coast, close to Shanghai.

St. Mary’s Church on High Pavement is the largest medieval building in Nottingham and a fine example of the prosperity of the city during the 15th century.  View its stunning interior, stained glass windows and monuments bearing witness to the funds donated by the guilds, merchants and nobility of the city.

The Nottingham and Beeston canal carves its way through the city centre and is a key feature of the vibrant waterfront district.  It’s overlooked by Nottingham Castle perched on a high rock above the city (currently closed for major renovations but due to re-open later this year).

The canal was once part of a much longer route which is now derelict but the present-day stretch is perfect for an afternoon stroll and to stop at one the bars and cafes for a drink to watch the brightly painted narrowboats chug slowly by.

Nottingham’s Theatre Royal and Royal Concert Hall are two of the country’s most vibrant and thriving touring venues.  Situated in the heart of the city, they lead the way for arts and entertainment in the East Midlands.

Fancy some retail therapy, then Nottingham’s the ideal place.  Start at the Old Market Square, a large pedestrianised plaza at the heart of the city with shopping streets leading off in each direction.  Dominating the eastern end of the square is the Exchange Building which was constructed in 1929.  Wander indoors and admire its magnificent 200ft dome and take a look in some of the arcade’s exclusive stores.  It’s definitely the place to go for designer shopping in Nottingham.

Lace Market and Hockley are two of the oldest areas in the city.  Making up part of the Creative Quarter, these districts each have their own unique character and today the area merges history with culture.  Once the city’s industrial centre, the Lace Market produced intricate lace that was renowned throughout the world and is what put Nottingham on the fashion map.  The grand red brick warehouses and factories are now home to creative businesses and quirky boutiques.

After strolling through Lace Market continue onto neighbouring Hockley.  The narrow lanes of Hockley exude bohemian charm and are filled with an array of vintage clothes shops, second hand bookshops and independent boutiques.

Head to the Canalhouse pub, located on the lower floors of the former Canalhouse museum.  It’s unique as the canal actually extends into the building, complete with two full size narrowboats and a bridge, creating an extra special atmosphere.  The wholesome food and craft beers are great too!

Sip cocktails in a former Unitarian church at the Pitcher & Piano on High Pavement.  This beautifully restored deconsecrated church is absolutely gorgeous with its vaulted ceilings, stained glass windows and original stonework.

Tucked away down a narrow lane lies Baresca, a Spanish tapas bar with its cosy atmosphere making diners feel as if they have been transported into an authentic Catalan bar in Barcelona.  Feast on dishes of garlic and chilli prawns, lobo beer battered cod, lamb koftas and Moroccan chicken.

The Cock & Hoop is a traditional Victorian ale house located in a period building that was once a pub with rooms for an audience to watch the hangings on the steps of the courtroom opposite, apparently a popular activity at the time!  Nowadays the Cock and Hoop is an AA rosette gastro pub serving real ales.

Diners can either eat in the cosy ground floor snug or in the downstairs dining room. Convivial atmosphere and superb cooking. 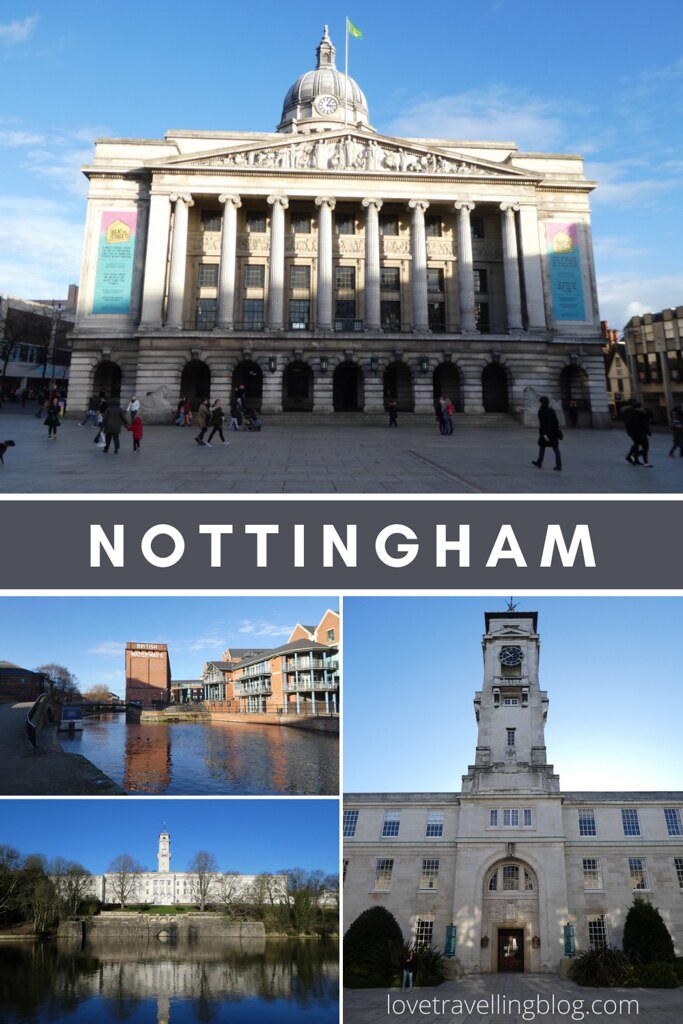 86 thoughts on “Nottingham – A Travel Guide”