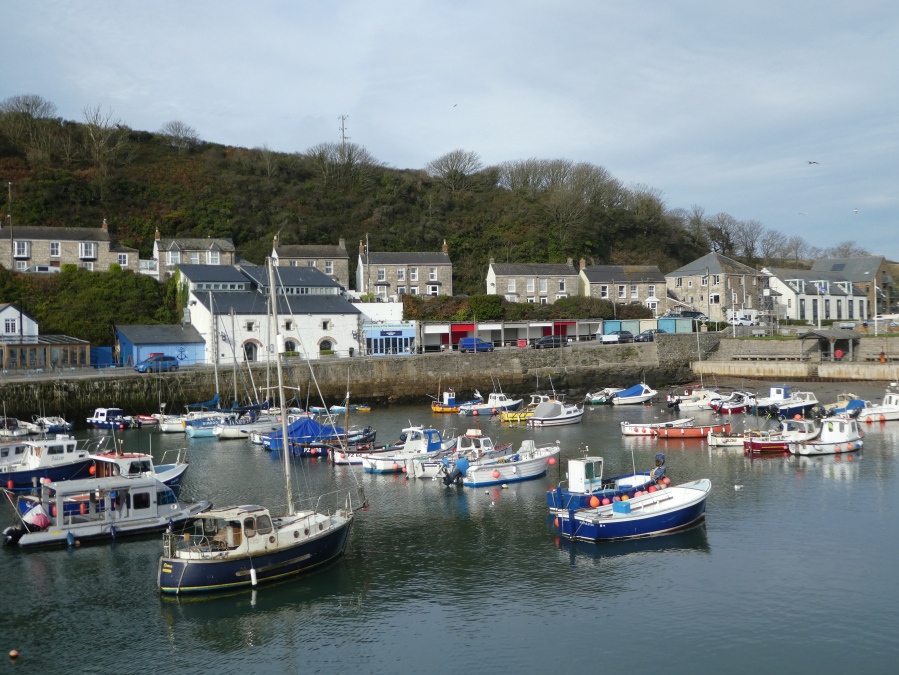 After enjoying a cooked breakfast in our hotel in Camborne we were ready to go by 9.30 a.m. and the first place on our list was the village of Porthleven, located 11 miles away.  We easily found some unrestricted street parking very close to the centre and were soon on our way to its picturesque harbour.

The harbour faces south west into the prevailing winds so for added protection it incorporates an additional outer harbour area.  During periods of strong winds the inner harbour entrance can then be closed to provide extra protection to the boats moored there.

We strolled along both sides of the harbour where a pair of cannons stand proudly on either side that defended the harbour in bygone days.  Our walk to the end of the harbour would have continued along its narrow pier but a sign warned us that if the red ball attached to a pole at the end of the pier is hoisted then it is considered too dangerous to proceed.  As the ball was raised we obeyed the instruction and turned back.

Porthleven is a delightful little place and appears to have retained its character as an unspoilt fishing village whilst at the same time catering for the needs of tourists.  It’s nothing like as popular as St. Ives or Padstow but is a likeable village and another Cornish foodie destination with several inviting pubs, restaurants and cafes surrounding its harbour.  There’s an annual food festival each April and weekly craft markets take place from Easter until October by the waterfront.

Back in the car, we continued along to Lizard Point which is maintained by the National Trust.  After driving through the small village we followed signs to the large National Trust car park which charges £3 but is free to NT members.  The car park is close to the rugged cliffs and as it’s very exposed to strong winds, I suggest wrapping up warmly.  The weather wasn’t quite as good as on our visit to Land’s End the previous day but it wasn’t raining which was all that mattered.

Lizard Point is the most southerly point of the British Isles and it was lovely to take a walk along its rugged coastline.  The Polpeor Cafe sits on the clifftop and has stunning views out to sea.  There’s also a small gift shop but not much else as it’s not at all commercialised like Land’s End.  The Lizard attracts fewer tourists but it’s an equally lovely place to enjoy a walk.

We started off by following a steep path down to  the old lifeboat station at Polpeor Cove which closed in 1961 when an updated one was constructed slightly further along the coast.  From the tiny beach we watched waves crash into the shore and lots of birds perched on the rocks.  The coastline along here is a bird watcher’s paradise with seabirds aplenty.  From the cove, we clambered back up the cliff path which led us past the most southerly point on mainland Britain with its sea stacks and rocky outcrops.

As we continued further, the Lizard Wireless Station at Bass Point came into view.  As well as being noted for its dramatic coastline, the Lizard peninsula is also the birthplace of modern communications.  It was in this remote location that Marconi undertook some of his pioneering radio experiments.

Another local landmark is the Lizard Lighthouse which is one of the largest in the world and easily identifiable with its twin towers.  We followed a public footpath from the coastal path which took us over a stile then along the edge of some fields before bringing us out in the grounds of the lighthouse.

The Lizard Lighthouse is the only one in Cornwall that can be climbed.  I would have loved to have been able to go up but it’s only open on certain days and the one we had arrived on wasn’t one of them.  The lighthouse engine room has been converted into a heritage centre telling the story of its 260 years and the many ships that it has safely guided to safety.

It was then just a short walk back to the car from where we drove onto the historic market town of Helston taking us about 20 minutes and passing RNAS Culdrose, one of the largest helicopter bases in Europe, on our way.

Helston was another Cornish town welcoming motorists as the Fairground car park on the edge of town was free.  The car park was just across the road from the Coronation Park so we strolled by its boating lake on our way into the town centre.

After leaving the park by a gate near to its attractive lakeside cafe we entered the town through the imposing Gothic gate like structure known as the Grylls Monument.  Grylls was a Helston banker and solicitor who saved many jobs by taking action to keep the local tin mine open during the recession of 1820.

The monument stands at the foot of Coinagehall Street, the town’s main thoroughfare which slopes upwards.  A welcome sight was the Coinage Hall, a cosy pub where we enjoyed a late snack lunch and some much needed cups of coffee.

Helston was yet another pleasant Cornish town with a variety of shops and a pub with a thatched roof lining its high street.  Reaching the top of the hill, we’d arrived at The Guildhall where regular markets take place on its ground floor which was formerly home to the corn exchange.

Returning downhill, we were just in time for our pre-arranged arrival slot to visit the Museum of Cornish Life which offers free admission.  It was formerly known as the Helston Folk Museum and it was just my sort of museum as it contains one of the largest social history collections in the south west.

The museum is located in the historic Market House and Drill Hall and spread over two floors with five separate areas covering agriculture, local trades, law and order, the history of the town, transport, and home life.

There are so many interesting exhibits including shop counters, vehicles, farm machinery and clothes which are really nicely displayed in an easy to follow format and a credit to the volunteers who run the museum.  Do try to call in if you are visiting Helston as I’m sure you would also find it of interest.

We then spent a little more time looking around the shops before returning to the hotel in Camborne after another lovely day touring Cornwall. 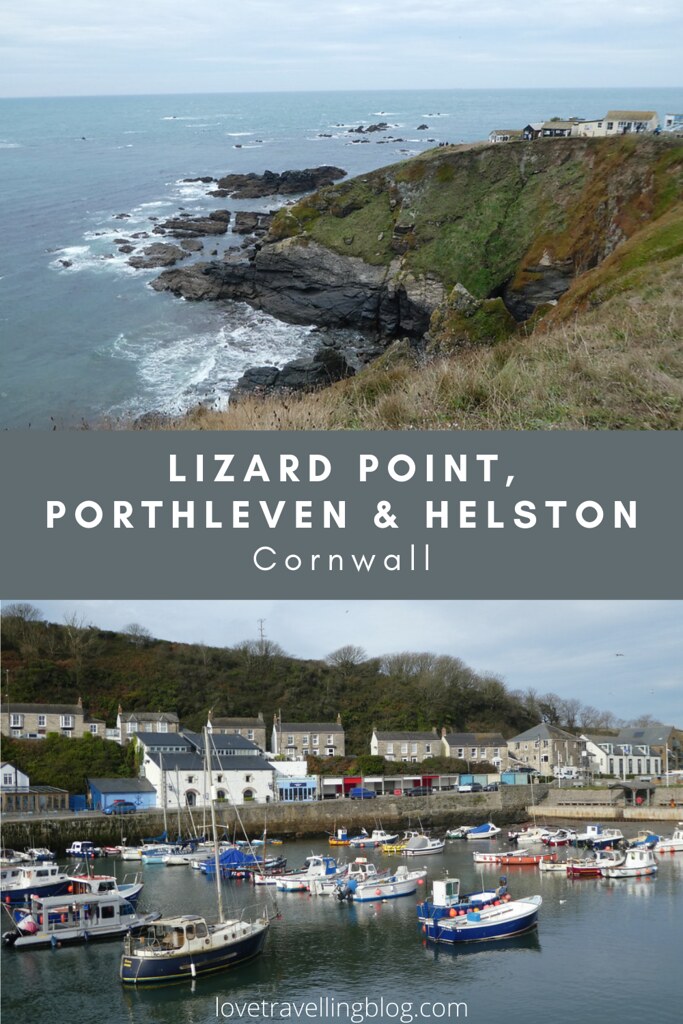