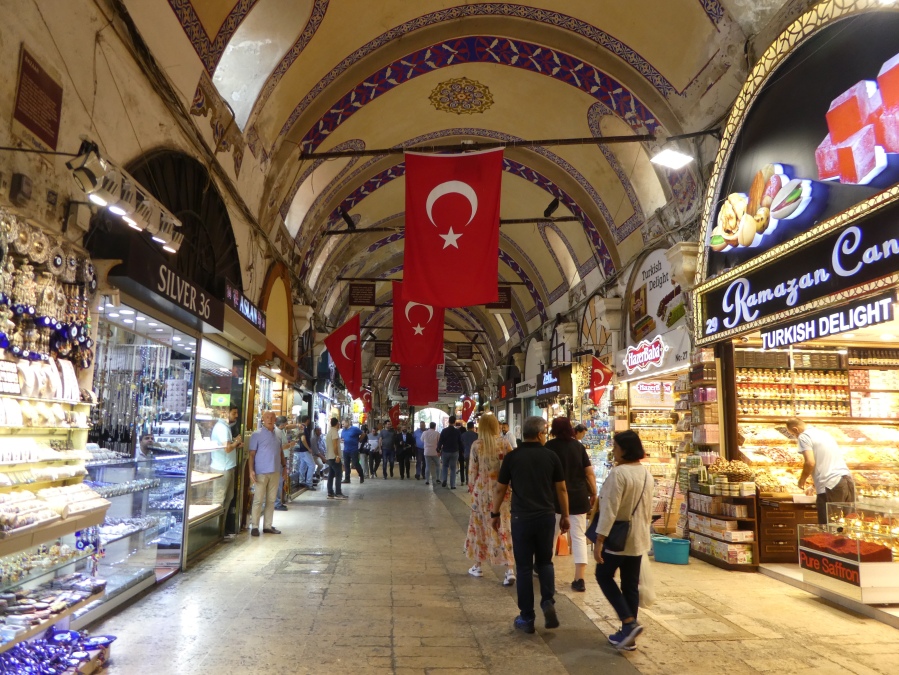 After a good night’s sleep, we tucked into a hearty breakfast in the elegant dining room of the Holiday Inn Istanbul Old City. As well as the usual offerings I was tempted into sampling some local cheese and olives.

I did, however, give the local Turkish coffee a miss as I’d tried it before and it wasn’t to my liking but thankfully cappuccino was available so I was able to have that instead. To complete my breakfast I found it impossible to resist a slice of honey drizzle cake – not something I would usually have at that time of day but rules can of course be broken whilst on holiday.

By 9.30 a.m. we were ready to set off and the temperature, already in the low 20’s was very pleasant. Our first stop was at Beyazit Square in Fatih to take a look at Istanbul University which is the oldest in Turkey. From the square, we entered the university campus through the main entrance gate and then wandered through the grounds as far as the Beyazit Bell Tower which stands 279ft tall and was originally constructed as a fire watch tower. These university buildings were previously the headquarters of the Ministry of War in the Ottoman Government.

Leaving the university it was then just a short stroll to our next destination, the famous Grand Bazaar, one of the largest and oldest covered markets in the world, open daily with the exception of Sunday. The bazaar contains a staggering 61 covered streets and more than 4,000 shops selling everything from jewellery to ceramics and Turkish carpets.

Wandering the maze of narrow alleyways we soon lost our sense of direction but it didn’t matter as we soaked up the local atmosphere and admired its decorative, arched ceilings. We weren’t tempted to buy anything but if you are, then haggling over the ticket price seems to be the usual approach to secure a deal.

Dozens of stalls next to each other sell similar products making haggling part of the local experience. Our mid-morning visit was well timed as it was fairly quiet and we weren’t jostled by large crowds. The Grand Bazaar boasts 22 entrances so. despite not knowing where we were, we at least found our way out and then used our phone to navigate to another of Istanbul’s historic landmarks, the Blue Mosque.

Sultan Ahmet Mosque (The Blue Mosque) was built between 1609 and 1616 and designed as an imperial show of strength to compliment the imposing Hagia Sophia which faces it across Sultanahmet Square. The mosque is supported by four ‘elephant foot pillars’ and its central dome is surrounded by four semi-domes creating a rectangular shape and is unusual as it has 6 minarets.

The Blue Mosque can be visited free of charge daily but is closed during prayer times. Modesty garments can be borrowed without payment from an adjacent kiosk and along with the majority of visitors, we were politely informed that we needed to cover up. I actually thought that I’d dressed modestly selecting a knee length dress and donning a thin cardigan to cover my arms but it wasn’t enough and I had to wear an ankle length black skirt and wrap a large scarf around my head and shoulders. My son was wearing a short sleeved shirt and long shorts and he also needed to wear a long skirt similar to the one I was given. At the mosque entrance we removed our shoes and carried them around with us in one of the reusable bags provided.

On viewing the Blue Mosque from the exterior, I had wondered why it was called ‘blue’ as it didn’t give that appearance. All was revealed once we stepped inside as over 20,000 handmade blue ceramic tiles adorn its interior featuring tulip, rose, carnation and lily designs. The luxurious thick carpet felt silky smooth under our bare feet and we were able to view most of the interior including the main prayer hall with its feature, large pillars.

Leaving the Blue Mosque we continued onto the nearby Hagia Sophia, entrance 72 TL. We joined a lengthy queue that moved extremely slowly and with the midday sun beating down on us, we decided to move on and to hopefully return a different day when it was not so busy and a little cooler.

To get some much needed shade we followed a path into Gülhane Park which extends to Kennedy Road near the waterfront. ‘Gülhane’ translated means ‘Rose House’ and these gardens were once part of the outer gardens of Topkapi Palace.

We enjoyed a long but pleasurable stroll through this large urban park and on reaching the water, we crossed a busy main road and continued along to Eminönu with its bustling ferry terminal where boatloads of passengers were arriving and departing. The area was thronged with commuters and tourists taking ferries and tour boats.

Eminönu is located on the south side of the Golden Horn at the southern end of the Galata Bridge. The Golden Horn is also known as the Bay of Istanbul and is the body of water that separates the north and south, old and new parts of European Istanbul.

We walked part way along the Galata Bridge which has a lower level lined with rows of bars and restaurants specialising in seafood with terraces on each side of the bridge. On the upper (road) numerous fishermen were hoping to land a catch as they leaned over the side of the bridge with their rods. We didn’t see any fish being hauled in, but we did enjoy the views across Eminönu with the beautiful 17th century Yeni Cami Mosque dominating the skyline.

Our stroll then took us slightly inland to the Spice Souk which had been built around the same time as the Grand Bazaar. Its interior looked very similar albeit on a much smaller scale and I actually preferred the Spice Souk to the enormous Grand Bazaar.

As we strolled around, we breathed in the delicate aromas of the colourful spices and glanced at the other local delicacies on offer. Although it’s still the Spice Souk, it has obviously diversified over time, now selling gifts and other merchandise.

Our feet were starting to ache after so much walking so we caught a tram from Eminönu back to Sultanahmet where we soon found a pleasant cafe for a rest and some delicious tea and cakes.

Back at the hotel we relaxed in its Turkish Bath and sauna and were fortunate to have the entire suite to ourselves. Then, at around 6.00 p.m. when the temperature had dropped a few degrees, we went for a walk through the bustling streets near Yenikapi metro station.

We stumbled upon an inviting restaurant which had some comfortable sofas on its terrace. Here we feasted on gently spiced chicken and beef dishes accompanied with a large basket of delicious flatbread whilst watching the sun set – a perfect way to end another enjoyable day exploring Istanbul.

A visit to Putrajaya, Malaysia

What a day, our first weekend in lovely Lincoln and starting it in style with our very own chauffeur! A big thank you to Stephen @white7lincoln #VisitLincoln #lovelincoln #lincolnshire #bombercommandlincoln
I've fallen in love with Lincoln, it's such a beautiful, small city and now with direct trains from London King's Cross, less than two hours from London! #LoveLincoln #VisitLincoln Lincolnshire #Lincoln
What a view to welcome me to Lincoln. Can't wait to start exploring this historic city! @visitlincoln #lovelincoln #lincolnshire #visitengland
Goodnight Blackpool, it was lovely visiting you! #blackpool #blackpooltower #lancashire #sunset #northpier
Enjoying a ore-theatre meal @beachhouseb overlooking the sea in Blackpool. The food is delicious and the atmosphere buzzing #restaurant #Blackpool #Bistro
Satisfying my wanderlust @destinations_shows taking place at Event City in Manchester until Sunday. So much to inspire me plus cooking demos, photo workshops and talks. Why not come along this weekend for a great day out and some travel ideas #destinationsshow #eventcity #manchester #travel #wanderlust #lovetravelling #travelshow #loveribblevalley
Wandering through Moscow's Red Square is like stepping into a fairytale. You might like to read about my visit in my latest blog post
Wish they were more heritage signs such as this one around our railway stations. I always need to pause and admire the Scottish terriers #scottiesofinstagram #scottiedog #scottishterrier #edinburghwaverley #vintagesigns