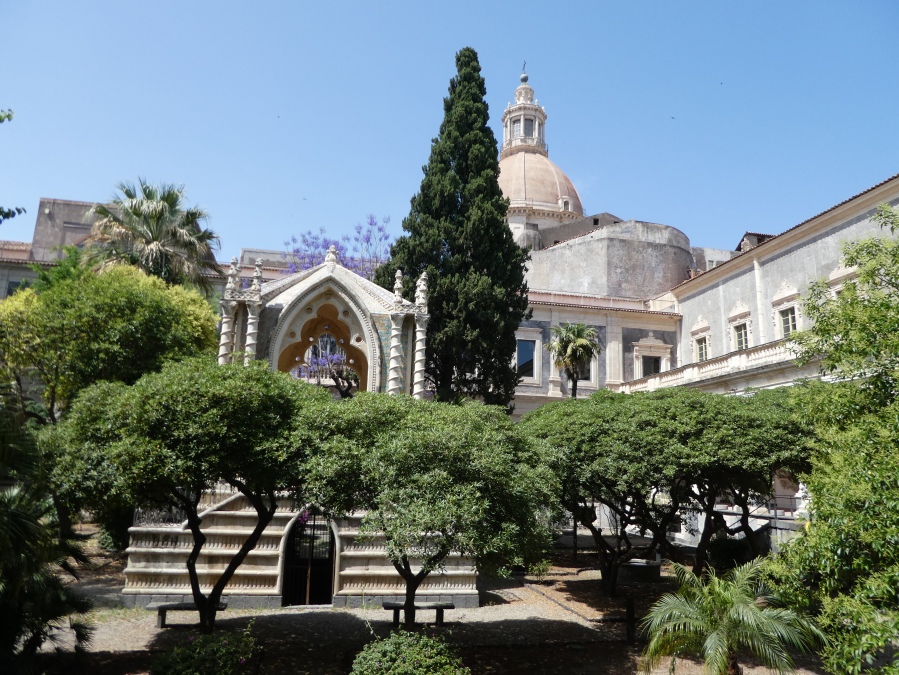 After enjoying a leisurely breakfast on our apartment balcony we prepared to go out and made our way towards the main square (Piazza Duomo). The Giro Sicilia car rally was about to get underway so we admired some of the vehicles and spotted a Morris Minor Traveller which one of my elderly relatives used to drive.

Continuing on a short distance, we arrived at the well preserved Castillo Ursino which is open daily from 9.00 a.m.to 7.00 p.m. with standard adult admission €10. Audio guides are available but as these were only in Italian it wasn’t very helpful.

Castillo Ursino was constructed in the 13th century for Emperor Frederick II and its formidable structure includes large circular towers on each corner with an open air inner courtyard.

The castle now houses the collection of the civic museum of Catania which contains an impressive collection of art and artefacts with paintings on the upper floor. Some of the information boards have English translations but not all, however helpful museum staff are on hand to offer explanations when required.  The castle was originally built high on the sea cliffs to protect the Sicilian coast but was encircled in lava after the 17th century eruptions of Mt. Etna filled in the moat and pushed the coastline further out to sea. The castle now stands 500m inland surrounded by bustling city centre streets and squares.

Leaving the castle we wandered along narrow cobblestone streets taking shade wherever possible beneath the beautiful oleander and bougainvillea trees which were flowering in delicate shades of cream and pink. After a few twists and turns we eventually arrived at the Monastero Della Benedettini where we picked up audio guides (this time available in English) and began our tour of the elaborate monastery buildings. It was interesting to view the grilles on the windows in the parlour. These windows were the only communication the nuns had with the outside world as they were able to see out yet not be seen themselves.

The exquisite chapel has a grand staircase and is well worth a visit. Near the exit are some architectural remains visible under a glass floor. After returning our audio sets we were ready for some lunch, finding a table in an attractive small cafe overlooking the university.

An English teacher sitting at a nearby table suggested we explore some streets with stone steps not far away. Around this area were lots of attractive small cafes with a large stone arch at one end leading to an elegant courtyard surrounded by historic buildings which are now the Law School of Catania University.

We had reserved places on a tour of the Monastero dei Benedecttini di San Nicoli L’Arena which was at one time the second largest monastery in Europe. Tours take place daily in English but need to be booked in advance (admission €8). There were about 20 people on our tour and despite having already visited a monastery earlier in the day, this was a totally different experience and a highlight of our stay in Catania.

The monastic building which was founded in the 1500’s is a UNESCO World Heritage Site and a marvellous example of architectural integration. It is now home to the Humanities Department of the University of Catania arranged around the Roman cloisters and beautiful gardens.

Our informative guide showed us around the most important parts of the monastery including the XVI century cellars which have been transformed into the faculty library. There was evidence of how Mt. Etna’s past eruptions had impacted on the building with evidence of lava flows.

On the upper floors, huge rooms where a solitary monk would have studied and lived are now used as offices for several members of staff. There is quite a lot of walking involved in the tour but I highly recommend it as it demonstrates how new life can be breathed into an old building whilst retaining its original features and memories of its previous use.

After the tour ended we called into a nearby bar for an ice cream and a glass of beer. I’m always spoilt for choice deciding which flavour of ice cream to choose and finally settled on salted caramel which tasted delicious.

Feeling invigorated after our short rest we continued onto the Pozzo di Gammazita, an ancient well located near the old city walls. According to legend, a French soldier fell in love with a local girl called Gammazita who was already engaged. On the day of her marriage she went as usual to collect water from the well and the soldier violently attacked her and prevented her from escaping. Rather than give in to his dishonour she threw herself into the well and the site has since been preserved. It is accessed down a flight of narrow stone steps in the courtyard of some residential properties adjacent to the city walls where the lava flow has formed above it creating a cave like appearance.

As it was such a clear evening we decided to complete our day of sightseeing in beautiful Catania with a visit to the top of the dome of the church of the Badia di Sant’Agata next to the Piazza Duomo. The interior of the church is completely white, illuminated with lanterns and natural light from the glass ceiling dome. It’s possible to climb to the top of the dome, €4 per person and a newly installed lift transports visitors up to the third floor. From there it’s necessary to take a staircase to the next level followed by narrow, winding steps to the top.

From the rooftop we were able to enjoy stunning city views with Mt.Etna towering behind. The panoramic views clearly show how the city is laid out with its squares and landmarks.

Returning down visitors are able to look inside the rooms on the first floor where the nuns used to sing. Here, they stood behind a wooden trellis through which they could see but not be observed. At the rear of this room, covering the windows is another trellis, this one made of iron and giving the appearance of lace, again for the nuns to look to the outside world but not to be noticed.

Visiting the church and climbing up to the dome was a wonderful way to end our day exploring Catania providing us with some of the finest city views and lasting memories.