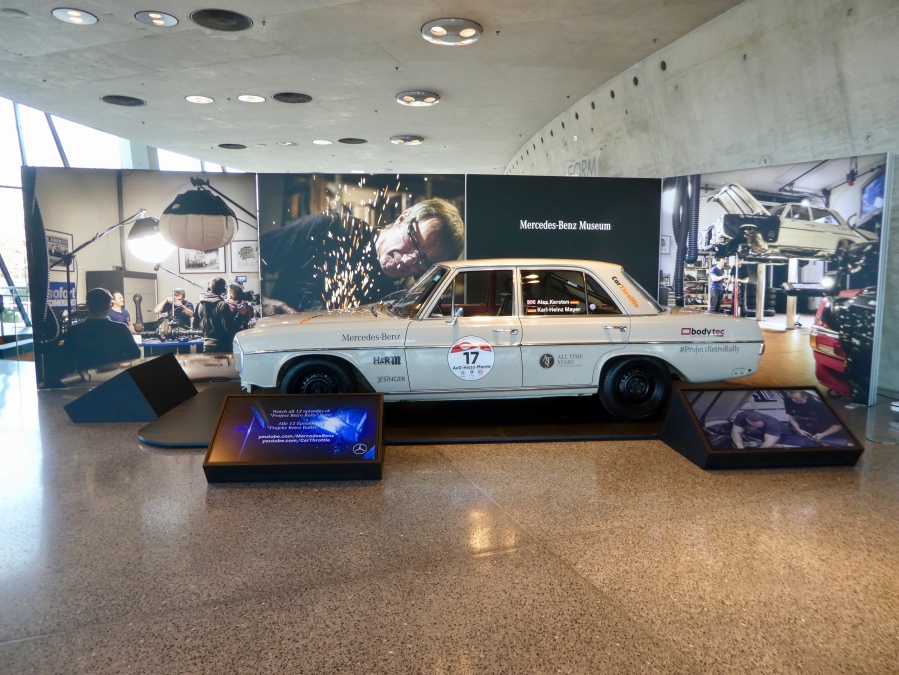 After enjoying a varied selection of dishes for breakfast in our hotel’s restaurant we were ready to set off exploring. If cars are your thing then Stuttgart is definitely the place to visit as the city is the home of Mercedes and Porsche. Both of these motor manufacturers have museums on the outskirts of the city but in opposite directions and it was our intention to try and visit them both.

We decided to head over to the Mercedes Benz Museum first. To get there we took the U Bahn to Bad Cannstatt and then transferred to a No. 56 bus just around the corner. This terminated outside the museum entrance which is next door to the Daimler factory. The museum is open from 9.00 a.m. to 6.00 p.m, Tuesday to Sunday with standard adult admission costing €10 (£8.50) and free for holders of the .StuttCard.

Mercedes Benz is the world’s oldest motor manufacturer and the museum is something of a pilgrimage for motor enthusiasts as each of its galleries pay homage to different aspects of the car maker’s history. Working independently, Gottlieb Daimler and Carl Benz were the brains behind the first cars in 1886.

The building itself is stunning and based on a unique cloverleaf concept using three overlapping circles to maximise space. It contains more than 160 vehicles and 1500 artefacts. Audio guides are available at no extra charge and we equipped ourselves with these before taking the glass lift up to the top floor where the story begins with the invention of the automobile by Carl Benz in 1886.

Following sloping pathways, a continuous timeline covering over 125 years takes visitors through the company’s history from its very beginnings to the present day. It features some of the oldest cars ever built to legendary racing cars.

The museum doesn’t only contain cars but has displays from buses, coaches, haulage and delivery vehicles to ambulances, fire engines and snow ploughs. In the celebrity section we viewed a Popemobile which was built for the visit of Pope John Paul II to Germany in 1980. Alongside this exhibit was the Mercedes Benz 500 SL that Princess Diana took delivery of in December 1991. She was the first member of the British royal family to own a foreign car.

Finally we viewed the Silver Arrows races and records exhibition where racing cars are displayed on a steeply banked curve to create the impression of a race track.

We spent around two hours in the museum and thoroughly enjoyed our visit. When handing back our audio guides the lanyards were detached and given to visitors as a souvenir which I thought was so nice.

Following our visit to the Mercedes Benz Museum we decided to turn our attention to pigs! Whilst glancing through the attractions covered by the StuttCard my eyes were drawn to the world’s biggest pig museum. I couldn’t admit to being a big fan of pigs but neither could I resist the temptation of visiting a quirky museum, so using Google maps we hot footed it over to the Schweinemuseum just a 20 minute walk away.

The pig museum is located in the former Stuttgart slaughterhouse, itself an architectural gem. The museum is open daily with standard adult admission €5.90 (£5). 25 themed rooms over two floors contain 50,000 pig related exhibits featuring pigs of any kind from models of different breeds to piggy banks. The displays range from adorable to downright tacky and when you have seen enough of pigs you can then enjoy food and drink in the cosy restaurant or, if weather permits, outside in the beer garden.

Just outside the museum is a U Bahn station so we hopped on board a train to Stadt Galleria near the central railway station. Located near this station is the Stuttgart State Gallery and as it was also included in our StuttCard we called in for a look around. Standard admission is €7 (£6) with free admission each Wednesday. The gallery is housed in two buildings, the State Gallery where we explored first is a 19th century classicist building and is home to works of art from 14th to the 19th century. Connecting the old museum on the gallery level is the New State Gallery which is dedicated to 20th century art.

Having viewed some interesting works of art, we continued on to the railway station for an S Bahn train to take us to Neuwitshaus Porsche-Platz home of the Porsche Museum. We had carefully researched our travel itinerary before leaving home and written down instructions to take an S6 to the museum. It was then somewhat puzzling to discover that this service didn’t appear to exist, but after making enquiries we learnt that it apparently operates as an S63 service at weekends, just to confuse us! Once we found the correct platform it was then just a short, four stop journey to the Porsche Museum.

Entrance to this state of the art museum is €8 (£6.90) and free for holders of the StuttCard. As with the majority of museums in Stuttgart it is closed on Mondays. Being a Sunday afternoon it was quite busy and we needed to join a lengthy queue to collect our tickets but thankfully this moved along pretty quickly and we were soon in possession of our entrance tickets and audio guides.

From the lobby we ascended a long escalator to the start of the exhibition area and discovered this was an ideal spot to gain an overview of its impressive collection. The museum contains more than 80 vehicles and many more smaller exhibits. We commenced our self guided tour exploring the company’s history through 90 years and then moved on to the main area representing Porsche’s product and motorsport history in chronological order.

It’s possible to open the doors and sit in some of the cars and just for a moment or two with my hands on the steering wheel, I dreamt of driving around town in a Porsche! There were several hands-on activities with video car simulators and foot pedals to press to be able to listen to the different engine sounds. The tour ends with a ’12m Porsche Touchwall’ an interactive device covering the nine decades of the company’s automobile history.

Before leaving the museum, we looked in the gift shop buying ourselves a souvenir to remind us of our visit. We might have not been able to afford to purchase a Porsche but a timely reminder of our visit was within our means! If time permits. I would recommend visiting both the Mercedes Benz and Porsche museums whilst visiting Stuttgart – both different but equally impressive!

By this time it was approaching 3.00 p.m. and we still hadn’t stopped for lunch so we popped into Amadeus an attractive wine bar near to the Charlottenplatz U Bahn station. Here we rested our feet awhile and tucked into bowls of delicious thick lentil soup with dark rye bread and glasses of wheat beer. This revived our spirits nicely and before returning to our hotel we made just one more stop at the nearby Stuttgart City Museum which is housed in the former residence of Württemberg’s last King, William II.

Entrance to the museum is free of charge and it was so nice to see a Sunday afternoon tea dance taking place in the entrance foyer. The actual museum is located on the first floor and is entitled ‘City Stories’ documenting the city’s history.

After a little look around we were quite tired after such an interesting but action packed day so we returned to our hotel room for a well earned rest and then went downstairs and relaxed over glasses of wine in the hotel bar. Considering where to go and eat we both decided it would be a good idea to return to Onkel Otto’s where we had dined the previous evening. When we arrived it was 7.00 p.m. and we were able to find a table straightaway. We couldn’t resist ordering schnitzels again but this time selected the Lumberjack version which was served with gravy and rosemary potatoes which we washed down with glasses of wheat beer.

To round off our final evening in Stuttgart we took the U Bahn to Ruhbank Fernsehturm, the terminus of the U15 line so that we could take a ride up the Stuttgart Television Tower. It was the world’s first TV tower and stands 217m tall. After opening in 1956 it became a prototype for other towers around the world which were based on this design.

We had expected to find the tower near the U Bahn station with the same name but although we could see it illuminated in the distance, it was still quite a way to walk. As usual, we followed instructions from our phone map but this guided us to a non visitor entrance with locked gates. Unsure where to go in the dark, I pressed the intercom button and spoke to a security guard who told us to drive around to the main entrance. When I politely informed him that we were on foot he came to find us, unlocked the gate and escorted us into the building through the staff entrance!

The tower is open every day until 11.00 p.m. and admission to the observation deck is €9 (£7.75) or free for holders of the StuttCard. We took the lift to the summit where we found an outdoor viewing area and a restaurant with panoramic city views. We then clambered up a spiral staircase to the uppermost viewing area but it was extremely windy up there so w didn’t linger very long. We were only able to see the twinkling lights of the city but on clear days one can take in panoramic views all the way to the Black Forest.

On returning to the U Bahn, we left the tower at its main entrance/exit which was just a 7 minute walk to the Waldau U Bahn station and seemingly more convenient than the Ruhbank Fernsehturm station we had arrived at. It was the end of a busy, fun filled day in Stuttgart and one we wouldn’t forget.