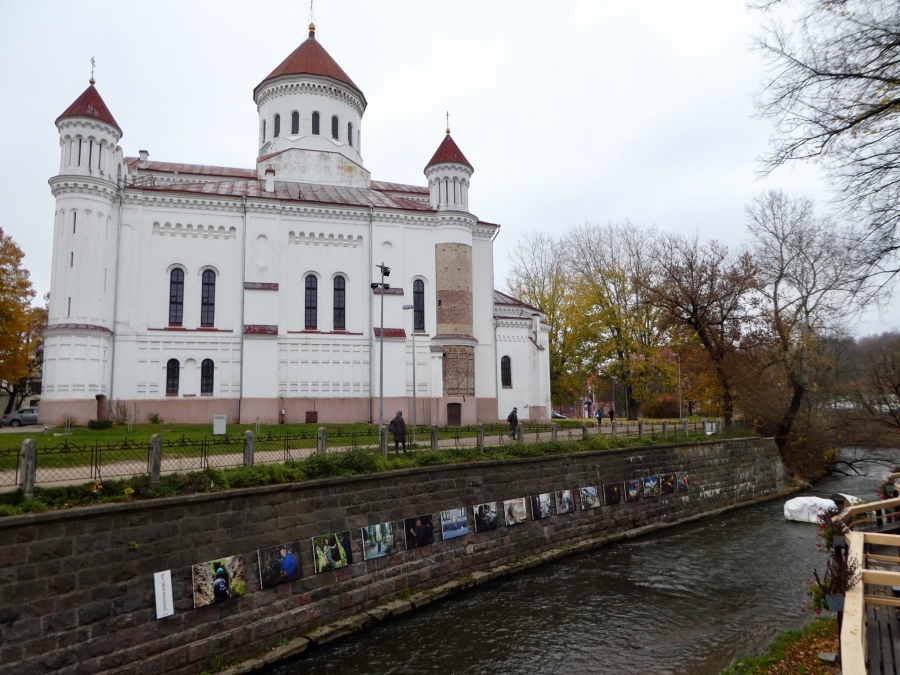 We started the day with a visit to the Museum of Illusions on the edge of the old town. The museum is open daily from 9.00 a.m.- 9.00 p.m. with adult entrance tickets €10 (£8.73) and free for accompanied children under the age of 7. Please note that this museum is not included in the Vilnius City Card.

After leaving our coats in the cloakroom we were greeted by two very enthusiastic members of staff called Mark and Emily who introduced us to the museum which has different types of Illusions spread over two floors. We were totally captivated by all of the illusions and spent lots of time trying to work out what each of them did. The staff were very helpful, giving us an opportunity to try and figure things out for ourselves before coming over and demonstrating the illusion for us.

We had so much fun looking at 3D images, kaleidoscopes, holograms and mirrors. Although holograms are present in our everyday lives on banknotes and credit cards the images in the museum transformed, appeared and disappeared before our eyes.

I was enthralled by the chair illusion. The seat of the chair was separated from its frame and our guide suggested I sit on the base whilst she took a photo with my camera. The idea of this illusion was to explore the laws of perception. The result was a tiny version of me sitting on the assembled chair, teaching us that it’s easier to perceive why our eyes see things which our brain can’t understand.

Another favourite was the rotated room. As you can see from the photo I appear to be hanging upside down from the ceiling, holding onto a picture. In reality I’m leaning over an upturned picture with my foot slightly raised off the ground and pressing against the wall. The bedroom furniture was attached to the ceiling and after the photo had been taken it just needed inverting to create the illusion.

We spent one and a half hours in the museum and loved every minute of it. The fascinating illusions amazed, confused and educated us as nothing was what it seemed. The amusing tricks taught us about vision, perception and science making it a great museum for all ages and although €10 might seem expensive, I think you would find it worth the money.

After leaving the Illusions Museum we wandered through the old town to take a look at the Gate of Dawn. This historical monument was built between 1503-1522 as part of the defensive fortifications of the city. Of the ten original gates, this is the only one now remaining as the others were destroyed at the end of the 18th century.

Under this archway, we consulted our map and made our way to the bohemian district of Užupis which translates as ‘the other side of the river’. This small enclave actually declared itself as an independent republic in 1997 with its own flag, anthem and president! We found a cosy pub for some lunch by the Vilnelē river then looked in some of the art galleries and craft workshops in the village centre.

It was then back to the old town and a visit to Vilnius University which is the oldest university in the Baltic states and one of the oldest in Northern Europe. The university was founded in 1579 as the Jesuit Academy of Vilnius by the Grand Duke of Lithuania and King of Poland.

The campus has some beautiful buildings and elegant internal courtyards. It’s astronomical observatory courtyard has an 18th century tower featuring signs of the zodiac on it.

From the Grand Courtyard we looked inside the elaborate university chapel which was visited by Pope John Paul II in 1993. The chapel has a renaissance style bell tower which is one of the tallest buildings in the old town and can be seen from much of the city. A second chapel has now been converted into an attractive university cafe with reasonable prices.

After visiting this ancient seat of learning we viewed the exterior of the Presidential Palace of Lithuania which is located very close to the university. The palace is the official home of the President. Guided tours in English, which are free of charge, take place each Friday and Sunday and can be booked on-line. We had actually reserved two tickets for the previous day’s tour but sadly this was cancelled as not enough people wished to join it. Hopefully, we will have an opportunity to return to Vilnius sometime in the future and be able to take the palace tour then.

It didn’t take too long to walk back to our hotel where we had a couple of hours rest before going out for dinner to the Senoji Trobele restaurant on the edge of the old town. We enjoy sampling local cuisine whilst on our travels so decided to try this traditional Lithuanian restaurant which we’d heard about. We entered through the restaurant’s attractive garden terrace which would be a pleasant place to enjoy a meal during the summertime but perhaps not on a cold, November evening.

We were warmly welcomed indoors and shown to a window table in one of its four cosy dining rooms. It was explained that the room we were seated in was less than a year old but had been skilfully decorated to compliment the style of the existing dining areas.

The menu is extensive and we thought it would be nice to start with a sharing platter called ‘Lithuania on the Plate’ of traditional meat, fish and cheese. This consisted of air-dried pork, herring on fried bread, local sausages and sliced smoked pigs ear. I was a little reluctant to try the pigs ear but after plucking up courage, discovered unsurprisingly that it was similar to smoked bacon, The snacks were accompanied with home baked seeded sourdough and our glasses of locally brewed honey beer hit the spot nicely.

Our waiter was very friendly and knowledgeable and suggested that we might like to try cold beetroot soup next. I’m a big fan of beetroot but wasn’t too sure about a bowl of cold soup on a winter’s evening but our rose coloured offering tasted delicious and wasn’t served ice cold. Interestingly, this course was served with slices of potato rather than bread but this seemed to work well.

We then moved onto one of the most traditional of Lithuanian dishes, a cepelinai dumpling. These zeppelin shaped potato dumplings were named after Graff von Zeppelin as their shape is similar in form to the airship he invented. The dumpling was filled with minced pork and served with sour cream. I found this dish to be a little heavy as part of a multi-course meal and would have enjoyed it more as a stand alone lunch time snack.

Next, we were served glasses of Green Nines, a Lithuanian liqueur made from 27 herbs and spices. This had a smooth taste but the most interesting aspect of the drink was that it was served in glasses made from freezing water to -20 degrees, taking the term ‘on the rocks’ to another level!

To end our meal we couldn’t resist trying the lingonberry cream cheese dessert which had a delicious combination of tart and sweet flavours. Our evening at Senoji Trobele had taken us on a food journey of Lithuanian cultural heritage with modern twists on recipes passed down through the generations. The restaurant can get quite busy but as there are several, small dining areas it still manages to retain a calm, relaxed ambiance making it perfect for both larger groups and couples.

Arriving in Vilnius, Lithuania and dinner at Mykolo 4

From Vilnius to Trakai, Lithuania

You'd probably think that these gorgeous old buildings are somewhere like Germany but you'd be wrong as they are to be found in the old town of Bristol. This vibrant area is filled with attractive pubs in this former dockside part of the city. Hope the sun is shining for you this weekend and you are getting out and about too. @visitbristol #Bristol #bristolpubs #oldbuildings #escapetheeveryday #lovetravelling #flowerboxes
We loved walking across the beautiful Clifton Suspension Bridge crossing the Avon Gorge in Bristol. Do you have a favourite bridge if so I'd love to hear. You might like to read about our day visiting Bristol Zoo, Clifton Observatory and the beautiful Clifton Village in my newly published blog post by clicking on the smart bio link above. @visitbristol @brunelsbridge @bristolzoo @cliftonobservatory #bristol #cliftonvillage #cliftonsuspensionbridge #bristolzoo #cliftonobservatory #thisprettyengland #visitengland #lovetravelling
Fraser bear is sitting on the dressing table looking after my Great Yorkshire Show badges reminding me of the wonderful days I've experienced there. #teddybear #fraserbear #badge #scarf #happymemories #harrogate #countryshow #travelblogger @houseoffraser
What a week, after last year's event having to be cancelled there were smiles all round with four full days of fun and action at @greatyorkshireshow in Harrogate. Everything worked well and we all felt perfectly safe. Not only that we enjoyed wall to wall sunshine! I've returned home with fond memories and look forward to returning next July. #Harrogate #YorkshireShow #Showjumping #myharrogate #VisitHarrogate #countryshow #brassband #horses
The afternoon tea garden at the Great Yorkshire Show. How wonderful it was to be back there, returning to things that we hold dear. Congratulations to @greatyorkshireshow for going ahead with this year's event. #greatyorkshireshow #afternoontea #harrogate #summertime #garden #flowers
We recently spent a day exploring Stroud in Gloucestershire. It's a lovely little town with its steep, winding streets full of interesting small shops and cafes. Do take a look at my newly published blog post to find out more.#stroud #gloucestershire #canal #canalwalk #escapetheeveryday #visitengland #thisprettyengland #lovetravelling
Renting e-bikes is a perfect way to explore the beautiful spa town of Cheltenham as you can cycle along the Regency Town Trail which is suitable for all the family. Do have a read of my newly published blog post to find out more and be inspired to visit. @visitcheltenham @compassholidaysuk #TheBicycleHub #cheltenham #ebiking #cycling #cheltenham #cotswolds #ourchelt #visitengland #thisprettyengland
A room with a view! Enjoying a few days in beautiful Edinburgh staying at @stayaltido @altidoatvita overlooking the Edinburgh & Glasgow Union Canal #edinburgh #aparthotel #hotelsedinburgh #fountainbridge #canal #edinburghcanal #VisitEdinburgh #escapetheeveryday #staycation2021