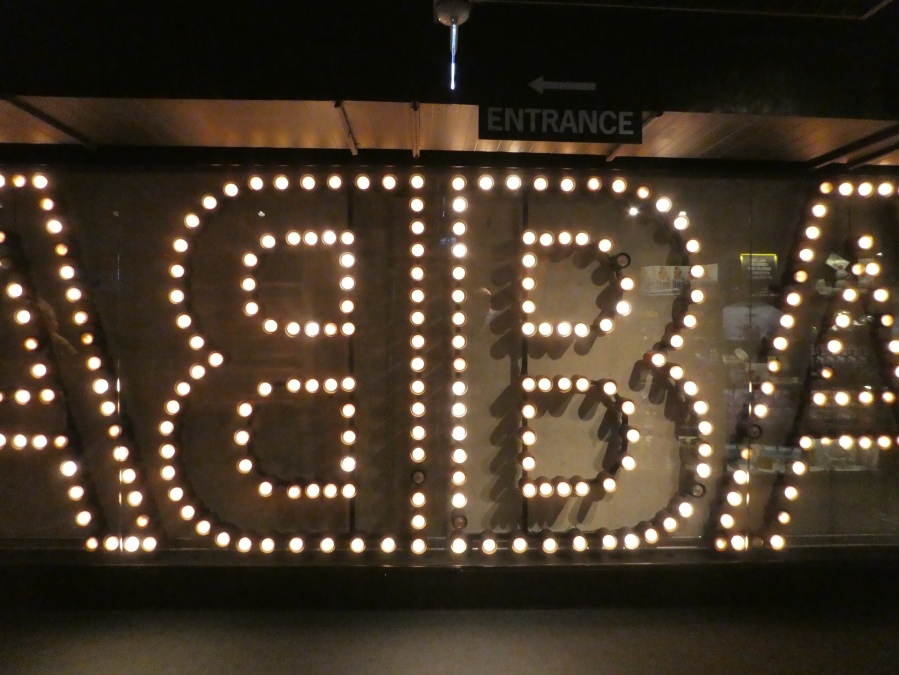 After a leisurely breakfast of yoghurt, eggs, toast and marmalade sat at the table in our cosy studio flat in Solna, we wandered down the hill and caught a blue line metro to Kungsträdgården from where we transferred to a 67 bus to Djurgården as the metro does not connect with this island.

In the 16th century Djurgården became a royal hunting ground when King Gustav Vasa confiscated the land from the Catholic Church.  Literally translated Djurgården means ‘animal garden’.  After the island was opened to the public in the 18th century it became a popular recreation area.

The 67 bus terminates at the Skansen open-air museum but we alighted one stop earlier outside the ABBA museum.  I had grown up with the music of ABBA and have happy memories of school discos and going out with friends on Saturday evenings dancing to Fernando, Dancing Queen and all their other hits.  It was only fitting then, that on a first trip to Stockholm, a visit to ABBA The Museum was an absolute must.  My husband was accompanying me on this holiday and I have to admit he didn’t share my enthusiasm for ABBA but needless to say, I dragged him along regardless.

Tickets to the museum cost SEK 250 (£21.25 each) and at the time of our visit, the ground floor gallery was featuring a temporary exhibition on Guitars of the Stars.  This collection of signature guitars seemed to interest Mr. C as it included Eric Clapton’s black fender Stratocaster ‘Blackie’.  This world famous guitar is chipped, scratched and cigarette burned from years of playing and touring.

I was more interested in taking the staircase down to the floor below where the ABBA story began.  ABBA were one of the world’s most successful pop groups with more than 380 million albums sold.  Fans are said to flock to Stockholm from all corners of the world specifically to visit this museum and to pay homage to their pop idols.

ABBA The Museum story begins with the early lives of Björn, Benny, Frida and Agnetha growing up in Sweden, becoming involved in music and of how they came to meet up and form the pop group ABBA.  We then relived their entry for the 1974 Eurovision Song Contest which took place in England’s south coast resort of Brighton.  Following Eurovision, ABBA soared to instant fame with their winning song Waterloo.

After Eurovision, stardom followed and the museum charts their success through videos and memorabilia.  In the Gold Room we were able to view many of their spectacular costumes and discover when each of them had been worn.  On display were original gold and platinum records plus album covers of singles and LP’s sounding very dated now in the days of digital downloads.

Our tickets came with QR codes enabling us to take part interactively in a recording studio and to sing karaoke, with our recordings saved as lasting memories of our visit.  There were three small karaoke rooms and although the museum was quite busy, there was only a short queue to sing along to their hits.  Each ticket allowed one song and as Mr. C. could not be persuaded to have a go, this meant I was able to use his ticket as well as my own.

It has to be said that I’m not an expert at karaoke but feeling quite confident I selected Mamma Mia for my first track and did surprisingly well, achieving a reasonable score.  Spurred on by this success, I then opted for Dancing Queen but found this to be much harder to keep the rhythm with and I fared much worse.  For those visitors who feel like performing in public there is a large hologram stage where one can become the fifth member of the band for a few minutes at least.  I only saw one person brave enough to try this but she seemed to be doing quite well.

Before leaving the museum I popped into the small recording room, scanned my QR code once again and sang along to ‘Thank you for the music’ which is one of my favourite ABBA songs.  There’s lots to see and do and I would suggest a visit of around 90 minutes.  It was a very uplifting experience for ABBA fans of all ages.  Visitors were predominantly female and ranged from teenagers to grannies, that’s the thing about ABBA, their music is loved by a wide audience transcending generations.  Alongside the museum there is a cafe/restaurant, gift shop and an ABBA themed hotel.

The museum’s tagline is ‘walk in and dance out’ and I left the museum in a joyous mood singing ABBA songs as we wandered along to the Djurgården waterfront.  Here, we admired sailing boats moored alongside the quay.  This was more to Mr. C’s liking than ABBA but he did admit to having enjoyed some aspects of the museum which was a bonus.

A little further on at Galärvarvet we came across two historic ships which are part of the Maritime Museum and are free to go on board.  The first one we explored was the icebreaker Sankt Erik which was Sweden’s first seafaring icebreaker launched in 1915.  She was decommissioned in 1977 and has been a museum ship since 1980.

Next, we climbed on board the adjacent lightship Finngrundet which was constructed in 1903.  She was stationed in the South Bothnian Sea during the ice free parts of the year and used to mark the location of shallow waters.  As automated lighthouses began to replace lightships in the 1960’s she ceased operating in 1969 and became a museum ship the following year.

After clambering up and down narrow flights of steps exploring these boats we were ready for a sit down and some lunch so we strolled further along Strandvägen to Djurgårdsbron and enjoyed cool glasses of beer and a light snack at a cafe/bar by the bridge.  It was quite an expensive cafe but it was lovely to relax on their comfortable sofas shaded from the midday sun whilst enjoying the gorgeous views across the water.

Feeling refreshed, we set off again crossing the bridge and continuing through the Royal Djurgården park for about a mile to the main building of the National Maritime Museum.  It was a very pleasant walk through the park, its path hugging the coastline with smart, little cafes and boat moorings along the way.  Many people were enjoying the unusually hot weather with some families having picnics whilst others just lazed on the grass, topping up their tans.

Eventually the Maritime Museum came into view, a gently curved neo-classical white building overlooking the bay.  This museum offers free entry and documents Sweden’s dominance in maritime history.  The galleries cover Sweden’s naval history, merchant shipping and ship building.  I found the section on container ports of particular interest as it was presented in a clear, easy to follow layout.

Upon leaving the museum, instead of walking back through the park, we noticed a bus stop at the far side of the museum and we only had to wait a few minutes for a 69 bus to arrive which whisked us back to T-Centralen in a short space of time.  We then transferred to the blue line of the metro to Solna Centrum, about a six minute walk from our accommodation.

Back at our apartment we had a couple of hour’s rest before returning to Djurgården by metro and bus.  The temperature had dropped slightly and we enjoyed a pleasant stroll along the waterfront working up an appetite for our dinner.

After crossing the bridge, we passed through an ornate blue archway into the park and a little further on we came to the Ulla Win Bladh restaurant where we had reserved a table for dinner.  This historic restaurant dates back to 1897 and during the warm, summer months guests are able to dine on its beautiful large terrace surrounded by pots of bright red geraniums.

We were shown to our table and introduced to our waiter Raffaele.  The restaurant specialises in traditional Swedish cuisine and as there were so many interesting dishes on the menu, it was difficult to choose.  Decisions made, I ordered herring five ways for my starter, which was so huge it could quite easily have been a meal in itself.  The herring was accompanied by cheese, pickles and bread. Mr. C. selected a goose terrine with fruit and nut bread accompanied by rhubarb poached in wine which he told me was delicious, so naturally I had to sample some of his as well!

For our main courses we both decided to have lightly salted salmon served with new potatoes in a cream sauce. I don’t usually select fish for both starter and main courses but as it was such a hot evening I didn’t really want a heavier meat dish although they did sound tempting.  Raffaele suggested a bottle of Soave which complemented our dishes very well.  As each dish was brought to the table I was impressed with how Raffaele took the time to explain what everything was and how it had been prepared.

For dessert, I chose a trio of chocolate with ice cream whilst a summer pudding tempted Mr. C.  They were both delicious and I was in chocolate heaven with my selection.  Relaxing with cups of coffee we chatted to guests at neighbouring tables.

The couple sitting at the table behind us were from Glasgow in Scotland and agreed with us that Ulla Win Bladh was the perfect location to enjoy a traditional Swedish meal whilst visiting Stockholm.  Both the food and service were superb and I would definitely recommend the restaurant for a memorable evening out in this beautiful part of the city.

We strolled gently back through the park pausing to watch some locals play a traditional Swedish game with wooden blocks.  A Swedish lady and her American family joined us and tried to explain the intricacies of the game known as Kubb which they told us was usually accompanied by one or more glasses of beer.  It was a fun end to an absolutely lovely day in the beautiful city of Stockholm.

Maritime Greenwich and a walk along the South Bank