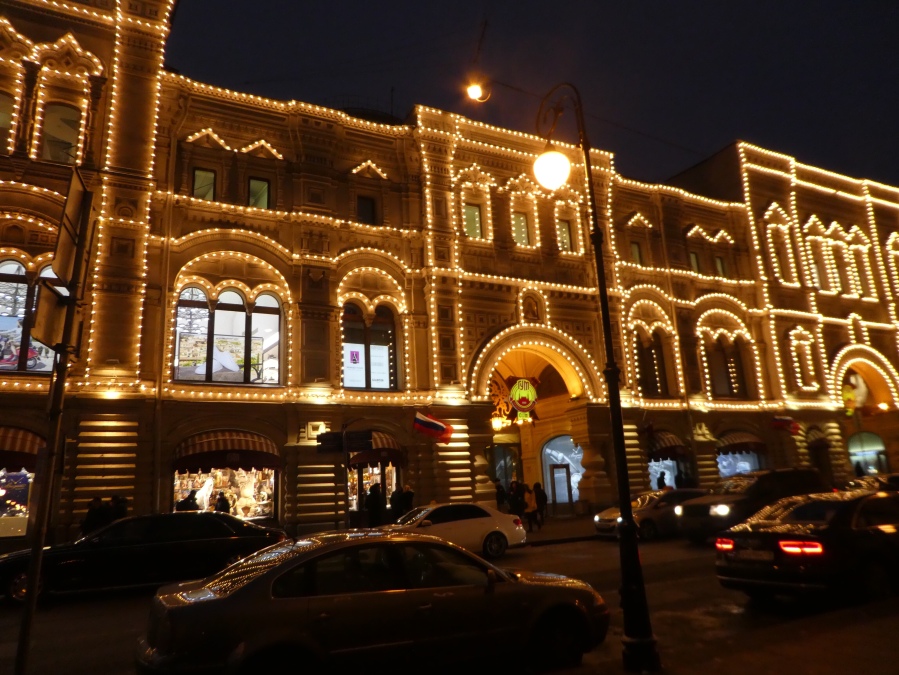 After breakfast, we took the metro to the new central business district, known as Moscow City. Located at the Delovoy Tsentr metro stop, the station has a modern ‘high-tech’ feel to blend in with the skyscraper landscape above ground.

Moscow City consists of several towers built in futuristic styles, each tower having its own distinctive design.  The tallest tower is the Federation Tower which is located in the centre of the district.

Walking around, it’s rather like Canary Wharf in London but much quieter.  There’s a huge indoor shopping centre called the AFI Mall with 400 stores, restaurants, cafes and a cinema.  It was interesting window shopping but the majority of the stores were global household names that we could find at home, so there was little point in making purchases.

Moving on, our next stop was to the Christ the Saviour Cathedral.  This was a little awkward to get to, as from Moscow City we needed to travel one stop on the metro changing four times.  It was worth the effort though, as this Russian Orthodox Church is a beautiful sight.

The cathedral was originally consecrated in 1883 but was singled out by the Soviet government for demolition in 1931.  The cathedral was re-built in 2000 loosely based on its original designs using modern building materials.  The interior has bronze walls and an exquisite central dome and is free to enter but photography is not permitted.

A footbridge across the river was constructed in 2004 offering some excellent views of the Kremlin and the cathedral.

it was then back on the metro one stop to the Bibliotek station so that we could visit the Russian State Library.  This modern Soviet style building was completed in 1958 and is the National Library of Russia.  It is the largest library in the country and the fourth largest in the world for its collection of books.

Non members need to call into the information office just inside the main entrance to collect a visitor’s badge to look around.  Coats and large bags must be left in the cloakroom where the friendly attendants seemed very organised also taking care of scarves, hats and gloves.  There is no charge for the cloakroom and visitors are issued with a ticket to reclaim their belongings.

I’m a lover of libraries so it was a treat to be able to look around.  After climbing the wide, marble pillared staircase, we wandered along corridors passing from one room to another. Along the way we admired oak, glass fronted bookcases and shelves housing some of its 17.5 million books.

There are 36 reading rooms catering for over 2,000 people, these are equipped with traditional dark green reading lamps and surrounded by old volumes of Lenin, Marx and Tolstoy.

From the upper floor windows we enjoyed good views across the city.  Here we found some leather sofas to sit and take a break from the hustle and bustle of the city centre for a few minutes and enjoy the peace and quiet of the library.

After collecting our coats we jumped back on the metro for a late lunch near Red Square then strolled through the Alexander Gardens to view the Tomb of the Unknown Soldier.  Two soldiers wearing grey fur hats to keep out the cold stand to attention beside the walls of the Kremlin, guarding the tomb and its eternal flame.

The tomb holds the remains of one soldier who died in December 1941 bearing an inscription that translates as ‘Your name is unknown, your deeds immortal’.  Every hour, on the hour the guards perform a ceremony to change duty and as luck would have it, we were able to see this happen.

We continued through the gardens and then walked along the Moskvoretskaya embankment to the new Zaryadye Park which has only been open for three months.  This 35 acre park is built on the site of the former Rossiya Hotel which was demolished in 2006.  I was eager to visit this park, as on my previous visit to the city shortly after leaving school, I stayed in what was then the world’s largest hotel.

Known for their work on the New York City High Line, the New York based architects introduced the concept of ‘wild urbanism’ harmonising urban life and nature.  The park features four traditional landscape zones – tundra, steppe, forest and wetland and uses the latest technology to create micro climates within the park.

It was falling dark as we strolled along the smart, wooden walkways through the trees and followed the one-way path onto the floating bridge over the Moskva River.  Here we viewed the city’s iconic buildings and the slow moving traffic down below on the embankment.  The park includes an amphitheatre, five pavilions and a Philharmonic concert hall.

Having enjoyed our visit to the park, we returned to our hotel in Sokolniki for a short rest and spent a few minutes checking in for our return flight to London the following evening.  It was 8.00 p.m. and snowing heavily when we went back out and Red Square looked beautiful in the thick snow.

Eating in GUM, we started our meal with bowls of Borscht which is a Russian / Ukrainian sour beetroot soup with meat and sautéed vegetables and just perfect for a cold winter’s night.

After a final wander around the elaborate GUM store we strolled through the Christmas market outside its doors.  A folk group were performing on the stage and it was fun watching people dancing in the snow to their melodies.

Although we had just eaten dinner we couldn’t resist the temptation of a sausage from the grill which was served with warm bread and pickles.  It was a magical experience enjoying the festivities as the snow was falling and we felt a little sad that we had to leave the next day.

Before returning to the hotel for the night, we took the metro one stop to Lubyanka to view this district after dusk.  Outside the metro station stands the huge Central Children’s Store, a vast emporium dedicated to childhood.

The main hall is 7 floors high and features a huge clock mechanism on one wall. The hall is decorated with stained glass pictures and an interactive Alice in Wonderland colouring book.

It was almost 10.30 p.m. when we stepped inside thinking that it would be closing soon, but no fear, it’s actually open until 3.00 a.m. each day, so we had plenty of time to explore.  Although it’s called a store it’s really a huge shopping centre dedicated to children with a branch of Hamley’s, a Lego store and much more.  I’m so pleased we found time to visit as it’s an enchanting place, bringing out the child in all of us.

We rounded off the evening strolling under the twinkling festive lights of Lubyanka’s designer avenue, returning to our hotel at midnight after yet another splendid day exploring Moscow.