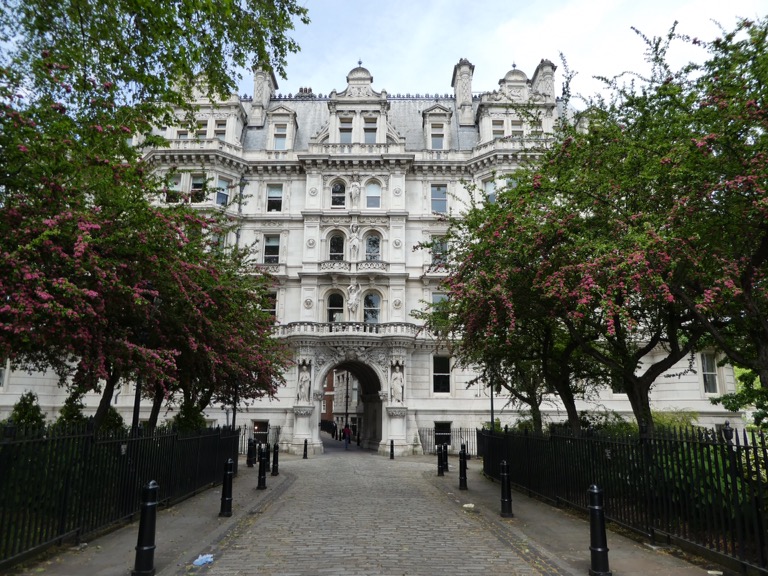 After our lunch break at the Royal Exchange we only had a few steps to walk to the next place on our itinerary – the Bank of England Museum.  It’s a little known museum with free entry and is only open Monday to Friday from 10.00 am to 5.00 pm.  The Bank of England, affectionately referred to as ‘The Old Lady of Threadneedle Street’ where it has its main door, invites visitors into its museum via its Bartholomew Lane entrance.  On entering the foyer there was airline type security but this didn’t take long as the museum was very quiet.  We were then handed two booklets entitled  ‘Your Money and the Financial System’ and  ‘Your Money – What the Bank Does’ both of which we have found very interesting.

It was our first visit there and we found the exhibits fascinating.  There’s something for everyone from interactive displays for children to several interesting galleries.

These focused on: Navigating financial storms, the History of the Bank since it was founded in 1694 and the Modern Economy 1946 to present.  In the Banknote Gallery we could inspect the new £5 polymer banknote which will come into circulation in the autumn.  Some exhibits are displayed in the beautiful Rotunda which is surrounded by statues called caryatids which were original features of the bank.  There is also a small gift shop where one can buy ‘coin’ key rings and other souvenirs.

After gaining some economic knowledge, it was off to visit the legal world at the Inner Temple.  To get there we boarded a bus to Blackfriars and walked along the Embankment to the splendid entranceway (see feature image above).  The Inner Temple is one of four Inns of Court which are incorporated associations and have been in existence since the 14th century.  The role of the Inner Temple is to recruit student members, train aspiring barristers and provide continuing professional development for established barristers.  The Inn has over 8,000 qualified members including judges, members and pupils.

If you haven’t visited before you will be surprised at the size of the estate – small leafy courtyards and cobbled lanes filled with barristers’ chambers. You can visit the 12th century Temple Church originally the home of the Knights Templar – it’s full of medieval effigies and stone heads along with the peaceful Inner Temple Garden.  The garden is open to the public between 12.30 and 3.00 pm weekdays and entrance is via the main gates opposite Crown Office Row.  The Inner Temple Garden covers three acres and has many specimen trees and wide herbaceous borders which were full of colour. Interestingly, we noted that the garden would be holding a Chelsea Flower Show ‘Fringe Event’ of posy making – which sounded fun!  If you find yourself walking along the Embankment one afternoon, do pop in for a wander around and a few minutes of peace and quiet away from the hustle and bustle of central London – I’m sure you’ll like it and with the exception of the Temple Church, it’s completely free!

Leaving the garden, we strolled along the Embankment a short distance to Temple underground station and enjoyed afternoon tea in Piccadilly before looking around Liberty’s which is always a delight.  The store is so inviting with its timber framed Tudor inspired building, it’s on Great Marlborough Street with a rear door leading onto the once trendy pedestrianised Carnaby Street.

Feeling hungry we headed along the Jubilee Line to London Bridge for dinner near the Tower of London then had a short stroll around the nearby St. Katharine’s Dock where we noticed the Royal Barge, ‘Gloriana’.  The Royal Barge was commissioned for the Queen’s Diamond Jubilee and was the lead vessel in the Thames Diamond Jubilee Pageant.  Sometimes the barge is moored at Richmond as we have noticed it there, too.

The end of another interesting day in London!

33 thoughts on “Day 2. The Bank of England Museum and the Inner Temple”

Back in October just before lockdown restrictions were imposed we enjoyed a ten day road trip to Cornwall. The break got off to a great start as we spent a few hours in lovely Taunton. You might like to read about our time there in my newly published blog post. Can't wait to be able to return to see more of Somerset! @visit.somerset @visit_taunton #somerset #taunton #plannowtravellater #staysafe #travelblogger
Those pastel coloured cottages help to make Bristol harbour so picturesque, don't you think! #bristol #bristolharbour #bristolharbourside
First signs of springtime in my garden, such a cheerful sight! #spring #springtime #snowdrops
Did you know that Birmingham has more canals than Venice ? It's a fascinating city and one we can all look forward to visiting when it's safe to do so. Find out more in my newly published blog post by following the link in my bio. @visit_birmingham #birmingham #westmidlands #dreamnowtravellater #visitbirmingham
It's exactly three years since I visited Tampere. I'm counting the days until I can return as it's such a beautiful part of Finland @visittampereofficial #finland #tampere #wishiwasthere
Happy Lunar New Year! It's so sad that we won't be able to experience Chinese New Year celebrations this year. Loved watching the lion dancing in London's Chinatown last year. #chinatown #chinesenewyear #liondance #chinatownlondon #memories #lunarnewyear #happylunarnewyear
Up, up and away. Taking the cable car up to the Upper Rock Nature Reserve in Gibraltar is something to look forward to when we can all travel once again. Find out more by clicking the link on my bio to my newly published blog post. @visitgibraltar #gibraltar #cablecar #dreamnowtravellater
Although Gibraltar is small, there are lots of green spaces like the Alameda Gardens with their lush vegetation and narrow, winding paths. How I wish I was there now! Follow the link on my bio to read my latest blog post. @visitgibraltar #gibraltar #gibraltarrock #beinspired #gardens #therock