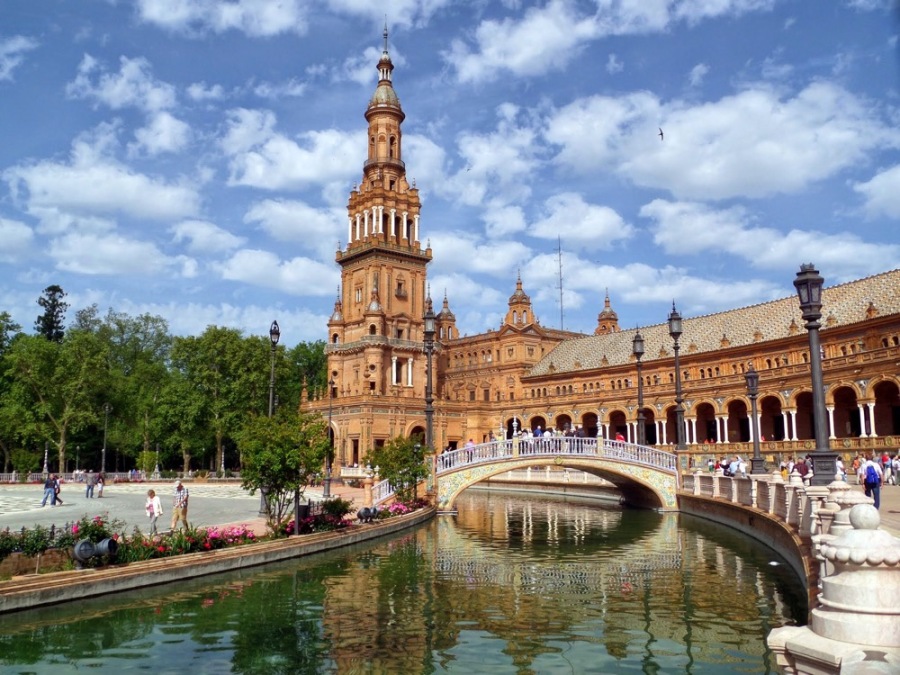 We spent the entire day exploring the beautiful city of Seville.  We walked everywhere, and along the riverbank to the Torre del Oro (The Golden Tower).  Seville owed much of its success in maritime trade to its river which offered ships more protection than a traditional European port.  Built in the 1200’s the tower’s name is derived from the golden glow that the reflection of the buildings casts on the river.

Nowadays the tower is home to a maritime museum detailing the river’s importance throughout Seville’s history.  We then continued through the Santa Cruz district to the gardens (Parque de Maria Luisa) and onto the magnificent Placa de Espanya.    The gardens stretch alongside the Guadalquivir river and were formerly part of the Palace of San Telmo but were donated to the city in 1893.

The Placa de Espanya was designed in 1914 by a local architect for the 1929 Iberio-American exhibition.  The Regionalist Revival style of architecture using local materials, was constructed to showcase Spain’s role in history, industry and technology.  The buildings are currently used as Government offices.

Placa de Espanya is a landmark feature in the city and should definitely be visited for its beauty and architectural charm.  After a lunch stop we visited the huge gothic cathedral which is still the third largest church in Europe.  It was built in the sixteenth century to demonstrate Seville’s power and wealth.

During the evening we walked around to La Placa de Encarnacion in the old part of town.  In this square stands the modernist Metropol Parasol which has been described as the largest wooden structure in the world.  It takes its name from six huge umbrella shaped structures made of birch wood and imported from Finland.  The Metropol Parasol is referred to as Encarnacion’s Mushrooms by locals and its design has been just as controversial as the exorbitant cost which was double the original budget due to delays and alterations to the original design.  It features a restaurant and a rooftop viewing platform.

Seville and the Semana Santa Festival

A Day in Cadiz

13 thoughts on “Day 5. Sightseeing in Seville”